Something About the Month of May

Four years ago today, we announced on Facebook that we were moving to Colorado, and that our house was for sale. It was on the market for all of 6 days, and we went under contract, by owner to owners with no agent of their own. It was the final confirmation we needed that Colorado was our future home, and that Compassion was my future job. Two weeks later, my Honda Civic and I made the solo journey across the country, and I started at an organization we had fallen in love with years earlier through Jane Wangui, our first sponsored child from Kenya.

Last year in May, we were tested significantly. We had just sold our house, were living in our first caretaking arrangement, and things had shifted at my work, leaving us feeling very much in limbo as my department underwent a major realignment. Ultimately, it resolved, but that experience was perhaps one of the hardest in my career.


May is Eric's favorite month, as it is the height of storm chasing season. In fact, he's out on a chase right now, and, as I type, he's sending me photos of crazy weather.

This May, we find ourselves in the midst of changes yet again. The caretaking place we are in is under contract after having moved here just 6 weeks ago. We'll be in here in total, less than 60 days. It's what we signed up for. 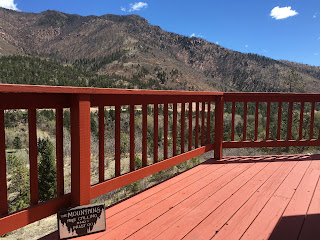 "The mountains are calling, and I must go." - John Muir

This might have been the quote that brought us out here four years ago, if 2 Timothy 1:7, "For God did not give us a spirit of fear, but of power and love and self-control" had not been our guiding verse that moved us across the country.

We have an accepted offer and have made it through inspection and its resolution, on a house in the mountains, just 31 minutes from my office!

We waited in the telling, because there were some things in the inspection we needed the seller to agree to fix that were really non-negotiable for us. They requested an extension on their response, and that didn't come until late this afternoon. But all is well, and they are correcting what needs corrected. We are scheduled to close on June 20. 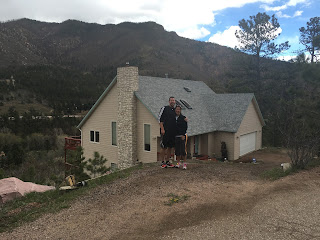 As I alluded to yesterday, we have a gap between when we're out of here, and in to there. Fortunately, we are blessed to have friends who are willing to not only take us in, but have the room to do so. Our friends Susan and Tim graciously agreed to let us stay in their mother-in-law suite during the gap, and we couldn't be more grateful.

The same day our offer on this house was accepted, exactly one year to the day when things went a little sideways for me for a moment at Compassion, I accepted an offer of my own.

For a couple of years, I've been eyeing another job at Compassion. I've told Eric it was one of the few positions other than the one I was in that I would love to do. Something that spoke to my ingrained identity as a social worker but allowed me to stay at a place that I was sold-out in love with the mission. The only problem was, there was only one of those jobs in the entire organization, and a really well qualified woman was in it.

And then she went to another department. And eventually, they posted to the job. And over the course of a month, I applied and interviewed...

And on May 23, I will be starting as Child Protection Advisor, where I am going to work with all of our field on programming related to the protection from, intervention in, and recovery of child abuse and neglect. Don't expect to hear about the details of the job here in the future, because this just isn't that kind of blog. But know that I'm moving to the best and scariest and hardest job I suspect I will ever love doing.

And I'll get to come home and decompress to this view.