A while back, Eric was contacted by one of his strategic partners, Prison Fellowship. They were hosting a 5K fundraiser in Colorado Springs in support of their Second Prison Project, which seeks to raise awareness of difficulty prisoners have post-incarceration in finding gainful employment, and being accepted back into society, which contributes to recidivism. This was to be their inaugural event, and one of Eric's contacts at PF was flying in from Washington DC to be there. So we said we would participate.


My friend Susan agreed to join us, and I planned to walk the route with her. Susan is a runner, but she's on injured reserve at the moment, and I figured that I would be sore (true) from the Climb the day before.


So that was the plan. 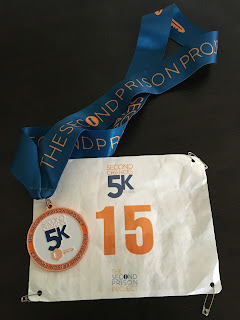 As I mentioned, this was the first year for this event, and when we walked up to the registration table, it wasn't exactly busy. I figured we were early and whatnot... but it never got really any busier. The first year of any event works against you, plus Mother's Day, plus other competing events around the area (like the Colorado Women's Classic, where MaryJane's mom MaryAnn placed 3rd in her age group. Whoo hoo!) Anyway, there weren't many people, and I started feeling bad about not running, since they were going to start the runners first, and then another start for the walkers.

So when the buzzer went off for the runners, we walked up to the line to begin the walk, and then I changed my mind, looked at Eric and said "I feel bad, I'm going to run it." And then I did. I was behind the pack, but managed to catch up when they went the wrong direction and had to about-face.

The race started at America the Beautiful Park, and headed out of the park and up Monument Creek, then round and back. It was a pretty nice day, and it isn't a bad run along the bike path that parallels the creek.

By Mile 1, however, I realized that this wasn't the greatest idea I had ever had. My legs, put to the test by yesterday's climb, were tired. They really didn't have the kind of turnover I want for a 5K. At that point though, I knew I was out toward the head of the race, a place I NEVER am, and well, I didn't want to lose that. Plus there was this 10 year old girl behind me, and I really REALLY didn't want to get beat by a 10-year-old.

So I kept going. Then at Mile 2, there was a guy that accidentally cut the course that bounded out next to me. He admitted as much, and it was all in good humor. He ran on ahead and I chugged along. As I headed toward the finish, my legs were starting to really feel it, and even though the course was basically flat, the tiny uphill over the bridges to take us back to the park had taken on an incline that they may not have the other 364 days of the year... Then there was the Mile 3 sign ahead, and I was gaining on the course cutter. I'm trained to run 5Ks, well, at least I was back in high school but you never really lose it if you keep running them, and I knew I had a kick. And while I know I'm never going to win a race, being that close to someone in front brings out the competitive streak, and so, I kicked. He kicked too, but I could tell he didn't have what I had... and I blew by him. We exchanged "good jobs" and fist bumps at the end, because we're runners and we are a little community like that.


When I had caught my breath, I jogged back down the course to find Eric and Susan, and found them having a grand conversation and getting along fabulously... not that I expected less, but of my friends, Eric doesn't know Susan as well, and it was really fun that they got along and found things they had in common and kept up conversation. I don't know about you, but I really like it when my spouse likes my friends, and vice versa. I'm also glad they didn't hold my decision to take off and run against me. I mean, its not like I gave them (or myself) notice (I would have tied my shoes differently... and stretched... and maybe changed what I ate for breakfast.)


As it turns out, I did, in fact, finish third of the women. My time wasn't fantastic, but with the small field, I did something I've never done before! I've placed in my division in the past, but never overall! So, that was fun, and they had a cute medal ceremony where we stood on boxes and everyone cheered. That will likely never happen again in my life, so I'll take it.


It was a good day. We capped it with a late lunch and great conversation. Wish I had taken a photo of us three. I'm not good at thinking of these things until later (which proves I am not a millennial...)


I may be having a little trouble walking now. Thank goodness Eric bought me "The Stick" several years ago, a bead roller that may be the best thing to come into my running life since Gu during a half.