Full disclosure: I originally signed up for the 25K. I thought this would be the perfect race to up my game from 1/2 marathon. However, given the number of times we have moved this winter, and just general non-prioritization, I was totally not ready for that. So I dropped to the 8 mile the week before the race.


The week leading up to the race was fantastic, and as you know, I was on the Incline several times. However, by the end of the week, as is typical with Colorado spring weather, the bottom dropped out of the temperature. Then, it snowed. As in, Friday I worked from home as it snowed a foot.


However, it was a trail race, and there isn't much that stops trail runners. I once ran a trail run wearing a prom dress, devil tail and horns, through 18 inches of snow. Granted, it was a royal blue knee-length prom dress, but still.


The race was on.


I arrived at the race and it was sleeting and blowing. On my way back to the car from picking up my packet, I found Tim and Susan. SPG had told me that Tim was running and that she might come along, and super trooper that she is, she did. It was COLD. I decided that I would wear my YakTrax, and grabbed them out of the car, along with my watch, dropped my bag, and headed back to the start line. I also ran into my old neighbor from the House in the Woods, Paul. Paul was a super sweet guy, and he and his wife Donna were great to have as neighbors, even if just for a short time and we didn't know them that well. Paul even agreed to run Ragnar with MaryJane and I! I had forgotten that he had emailed and said he was running... but oh yea, this was apparently the warm-up act for next week's 25 mile race he's going to do in Buena Vista.


Despite my hopes, it did not get warmer at the start line. Tim, that nut, ran in SHORTS. Granted, he had a sweatshirt and compression socks, but still! We were at the start line together, but there were way more people than I expected, and we got separated just after going through the starting gate.


The first three and a half miles were on the Greenland trail, which is normally a wide trail that looks like it could almost be enough for an off road vehicle. However, after the snowstorm, there were two single tracks that were mostly packed down from the runners from the 25k and 50k. There was quite a bit of slush and puddles, but I managed to pretty much stay dry. The trail rolls, but it wasn't unmanageable, even in the snow.


After the 3.5 mile mark, designated by the only fuel station on the course, we turned off the main trail and immediately were knee deep in snow going uphill. While somewhat packed down from the runners who had gone before, this was definitely single track and not as well packed. It was looser snow and the footing wasn't great. I was SO glad I chose my trax, because I have NO idea how people did it without... I would have slid back down the hills. As it was, there were a number of people that just stopped, in long lines, and walked up the hills, which we would experience for the rest of the course. I had made up my mind that I wasn't stopping, and I was going to run, no matter what it took. However, that meant passing people, and that meant that getting into the deep snow and post-holding past people. Uphill. That was pretty tiring, and I could feel my quads getting quite the workout.


About five and a half miles in, we turned back toward the finish, into the wind. It had continued to sleet, and now it was pelting into my face... at one point, I thought my cheeks might be bleeding. The rolling continued, including some fairly decent slogs uphill. It eventually opened up and we ran through wide open spaces, until finally! The end! I finished those 8 miles not much faster than I have run a half marathon, but given the conditions, I'm not overly worried.


SPG was at the end, and Tim finished shortly after I did. Paul, however, was the rock star of the day, and finished a solid 10 minutes before I did, placing 4th in his age group. Dirty, wet, and getting cold, we called it a morning.


Maybe next year will be warmer? 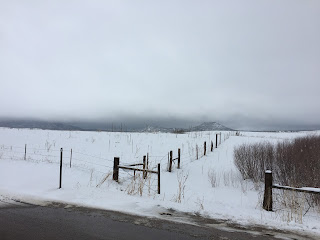