That Time I Nearly Sunk the Tractor

I might just kind of suck at this caretaking thing. Or parts of it, at the very least.

Eric left last Saturday for the East Coast to go direct a YFC Middle School Camp. Now, I like kids and I worked with kids and all that, but if you think for a hot minute that I'm going to go to freaking Baltimore and spend a week's worth of vacation in 90 degree heat and 90% humidity with a bunch of smelly junior high kids, you've obviously been smoking the legal stuff here in Colorado. And yes, junior high kids smell. Especially in 90 degree weather. It's just a fact. That man is a martyr. Also a fact.

So, Sunday I get out and make a valiant effort at mowing the meadow. Now, I've mentioned that it has rained here. A lot. Like A LOT. The pond has been flooded out and the meadow has been half under water since May, and its only recently gotten dry enough to actually contemplate mowing. However, the fact that we haven't been able to mow has not meant that the grass hasn't grown. It has, and I'm pretty sure that had Josie Zolman, one of the seven Zolmans that came to stay with us over the 4th of July (I know, I'll post about that!) had gone into the meadow, we would have lost her and had to call search and rescue.

New Kid on the Block

﻿
So, we have a new neighbor. And I have to admit, he's gotten under my skin a little bit. He showed up the night before the Zolman's arrived at our house (blog forthcoming, but we've had 2 weeks straight of company!), and has occasionally wandered through our backyard, uninvited, since then. 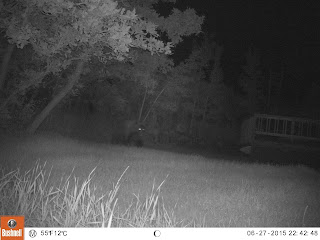 I am not a road rager. I come from a family of fast drivers, lead-footers, and at least one family member (side-eye to you there, Dad) that has threatened to mount and RPG launcher onto the hood of the car. I married someone who is increasing impatient with left-lane drivers,  non-turn-signal-users, etc. However, I am not a road rager. Now, I won't say that I'm not above mentally commenting on the character of other drivers (Chris, you know what I'm talking about here) when they do something particularly moronic, but I don't generally act on my five-dollar-word descriptions.

The weekend before July 4 was a movin' and groovin' one, that's for sure. I was up at 5am on Saturday morning, and out the door to climb the Incline. Sometimes you just know it's going to be a good day. I only had to make three catch-your-breath stops and PRed both up and down. Nice.

Headed to the farmer's market and then home to shower, change, and then Eric and I headed up to Denver to help a friend move.

The real action, however, was Sunday. Eric learned that Cripple Creek, a town about 2 hours away in the mountains, had what was called the "Donkey Derby Days" festival. Now, we're down for about anything called a festival, and have, in our past, attended such events as Apple Fest, Johnny Appleseed Fest (yes, different than apple fest), the Pickle Festival, Grabill Days, Greek Fest, River Fest, German Fest, the Peach Festival... well, you get the idea. Cripple Creek is an old mining town turned gambling hall town, with its own herd of semi-wild donkeys. These donkeys roam the streets of Cripple Creek, and are supposedly the descendants of donkeys used in the mines (which, by the way, is a horrible existence for donkeys!) People feed them, and they wander around at will. There's even a hotline you can call for the last known location of the donkeys. Anyway, Cripple Creek has a Donkey Derby Days festival, the funds from which go to support the ongoing care and occasional feeding of the donkeys (trust me though, they never go hungry.)