Like so many other Americans, our alarm went off at 3:30 this morning. Well, Eric's did. I was already awake, because the adrenaline from yesterday had me up most of the night, so I was making coffee and putting together road food by then.

By 4am, we were on the road, destination, Wyoming, in the path of totality for today's eclipse. We honestly debated if my going was a good thing, I mean, I did complete do a bit of a workout in the last 24 hours. But, I was feeling ok, so into the car I went, and then slept most of the way to Wyoming. Car sleeping is almost as good as camper sleeping! 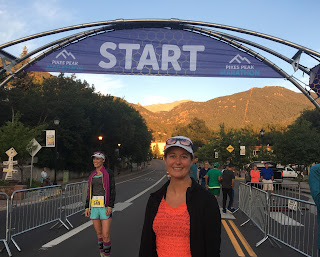 "I climbed a mountain, and I turned around..."

I started training in February, and today was the day: the Pike's Peak Marathon.

This last week, Eric has played coach for me: checking to make sure I didn't run too much, got enough sleep, and wasn't disturbed... so from Wednesday on, he insisted on sleeping in the guest bedroom, where he didn't get much actual sleep. Saturday, we saw our friend Amy and my old co-worker Dave off on the Ascent, (which they both rocked!) and then Eric was on to ensuring that I didn't do too much, and was well-rested for race day. I owe him - including for nearly a week of missed sleep. Trust me, I know from missed sleep.

Click Here to Read the Rest of the Story»
2 comments:

This post was supposed to be a funny post about the dumb stuff that I'm up to as I train for PPM. But then Charlottesville happened... white supremacists marched, neo-Nazis bought torches at Home Depot and walked down the street with them, people saluted... and there was  counter-protest, then violence, then a white nationalist mowed down counter-protesters with his car in what I can only describe as an ISIS-inspired attack, killing one and hurting a bunch.

And we have Nazis running around, and white nationalists in khaki pants and button-down shirts pretending respectability while spewing hate and vitriol. And killing people with their cars.

And I can't come up with a funny thing to say about my training, maybe tomorrow.