Like so many other Americans, our alarm went off at 3:30 this morning. Well, Eric's did. I was already awake, because the adrenaline from yesterday had me up most of the night, so I was making coffee and putting together road food by then.

By 4am, we were on the road, destination, Wyoming, in the path of totality for today's eclipse. We honestly debated if my going was a good thing, I mean, I did complete do a bit of a workout in the last 24 hours. But, I was feeling ok, so into the car I went, and then slept most of the way to Wyoming. Car sleeping is almost as good as camper sleeping!

Traffic was heavy from Denver north. Eric took back roads quite a bit to avoid the jam on I-25, and even those saw more cars than usual. However, more than an hour before the eclipse was to start, we had found our location, on a ranch road just north of Wheatland, Wyoming. We could glimpse the highway from our location, and there were some other folks around, but we were far enough away that nothing bothered us.

When the eclipse started, we were totally set up, like a tornado chase, with laptop rolling, tracking the dash cam, GoPro on the roof, camcorder on the tripod, and the Canon still photo camera taped up with sun filter. We got really excited to see the first "bite" out of the sun, and spent the next while popping our safety-approved glasses on and off. The first thing I noticed is that you don't need the whole sun to be daylight out. With 75% of the sun gone, there wasn't much difference in light - maybe more like afternoon than morning.

Then, things changed. With 90% of the sun gone, the wind, which had been blowing quite strongly all morning, died. We started to hear crickets. 95% gone, and it started to feel coolers and look noticeably darker.

Then, there it was. The last bits... and totality. It was still, and dark. Not total blackout, but dark. The horizon all the way around looked like post-sunset.

And the sun. The light, normally yellow in hue, had turned a brilliant white around the edges of the moon. Completely new, completely different, like a different light source all together. It was the most amazing thing. I don't know that I expected it to be as significant as it was. We couldn't stop staring. 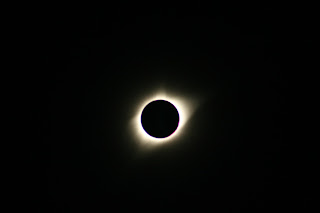 And then, just two minutes after totality, the sun began peeking out of the opposite side of the moon. On the ground, it felt like a white spotlight was shining on us, and yet all around was still dark.

And just like that, the light came back up, and rapidly, it was back to normal.

We packed up, and headed out. I kept my glasses on, and watched the moon move out of the sun's path, bit by bit, from the sunroof of HailNo, as we made our way back to Colorado. I'm pretty sure that rural Wyoming has never seen bumper-to-bumper traffic like it had today.

My sister asked later if we saw stars. They may have been out, but honestly, we were so enamored, we didn't notice.

I know why people chase eclipses now. That was incredible. 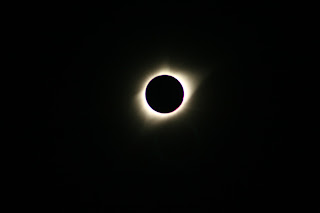