May 21st was load-it-up day. This differs from moving day in one key factor: we didn't actually move out.


As it turned out, I was starting my new position on May 23. We planned to go to Toronto over Memorial Day weekend, and I was taking June 3 off to run the Ragnar Relay again.


There was simply no other days that I could be out of the office. On top of it, we needed to figure out what the heck to do with our stuff, since House 6 closed on May 31, but we wouldn't close on our own home until June 20. So, we do what we have done best for the last year: figured it out.


This meant ordering PODs, hiring people to move furniture into said PODs, purchasing additional moving blankets to protect the furniture, and cajoling a friend (thanks Daniel!) to help move boxes into another POD.


It also meant holding my breath and feeling my anxiety skyrocket every time the younger of the two movers we hired came down the stairs, as the shoes he was wearing lacked the laces they should have had. I'm pretty sure OSHA would have had a fit. Fortunately, no accidents occurred.

It also meant dealing with some weirdo who showed up, identified himself as "Jay," a 60-something BMW driver who stated he was interested in seeing the house, and, when told that it was sold, asked if he could come in and see it anyway! Then, as if that wasn't enough, when I told him "no," (and feeling glad there were four large men around who were on my side) he asked if he could look around the outside of the house! I told him he could stay on public property and look at the house, he started asking all kinds of questions about who we were and caretaking, etc. and when we were moving out (umm, duh, do you not see the guys loading the truck? But I'm not going to tell you a date!) He proceeded to take a photo of the house from the street, and sit in his car watching the house for a good 45 minutes. WIERDO!!!!

The guys loaded the furniture, and it "just" fit. The desk wasn't loaded because I had a Craigslister coming to purchase it. They did, however, move it into the garage. We got the boxes and other assorted stuff into a second POD that day as well. 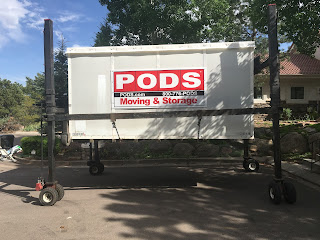 The house was rather empty by the time we were done. By rather empty, I mean that we had our clothes, cleaning supplies, an air mattress, and little else. My friends Debbie, Em, Lauren, and Krista, bless them, agreed to take my plants home until we closed (homeless people don't keep house plants), and Sunday and Monday, I made the rounds with pots and baskets and many many thanks.

Eric left Sunday morning for a chase, which was good. He offered to stay behind, but the reality is that closing down a house is easier to do with less people walking around, touching stuff. So, Sunday, I worked on shutting down more rooms, worried a little bit about Jay randomly showing up again, packed up food and clothes, and realized that the "last minute" stuff that was still in the house was a LOT of stuff. I tried to max out the PODs...

To realize that the locks we had purchased at Harbor Freight and put on the PODs didn't work so well. As in, I couldn't open one at all. I literally spent hours out there, trying to unlock that lock. It wouldn't budge. I tried everything. I pushed, I pulled. I jumped up and down. I went to Home Depot and bought WD40. I got out every key in the house and tried every key in that lock. Hours. Days. Broken blood vessels in my fingers. One lock wouldn't open. So I maxed out the other POD, and replaced that lock, which wasn't working well either, with a new one. There may have been swearing involved.

Do you know how much work it takes to shut down a 5,000 square foot house? Ridiculous. The amount of floors that need to be cleaned alone is stupid. But let me tell you, as much as the lethargy of the last caretaking gig was trying to set it, I scrubbed those floors. And the countertops. And the bathrooms. I vacuumed the basement, the only place where there was carpet. I closed curtains and stayed out of rooms. I packed the rest and slept on the air mattress.

Eric came home, and, because this process is just out to GET me, opened that freaking lock on the first try. There may have been more swearing, at least in my head. He packed out the rest of what we could into that POD, and Wednesday afternoon, the company came to pick up everything we own and take it to an unknown location and hold it for a while. I hope we see it, or at least our bed, again (and we bought the insurance if we don't.)

Thursday was move-out and fly to Toronto day. I had a full day of work, and so we packed up the cars the night before. We cleaned and swept what was left, but I had to leave stuff for Eric to take in the morning after I left. He wasn't quite able to get everything into HailNo, and had to make two trips up to our friends' Susan and Tim's place, where we'll be staying until we close, and thank God for them.They have a great place with an apartment in the basement, and graciously are allowing us to stay with them. My mom asked how we're going to pay them back. The reality is that there is no way we can - this is pure generosity on their part that we can only hope to pay forward some day (and get them a nice thank you gift). Anyway, by 1pm, I got a text from Eric, "Officially out."

Done with this chapter of our lives. Left the keys and the garage openers on the counter, and said goodbye to caretaking.

Of course, because nothing ends neatly, Eric got a text from our agency, who had come through over the weekend to check us out of the house and said it looked fine. The text said that the new owners were complaining that the house was messy during their final walk through.

Bull. crap. That house was clean, and they are totally looking for some last minute something from the sellers. But thanks for casting pall on the end of this. You'll fit right in with the rest of the hoity-toity jerks in that neighborhood, who never smiled or returned a wave one single time I ran by them the entire time we lived there. And the neighbor who never said a word to us or introduced himself, but came over to interrogate our cadets one night when they were using the hot tub. Then never said anything to us after that. 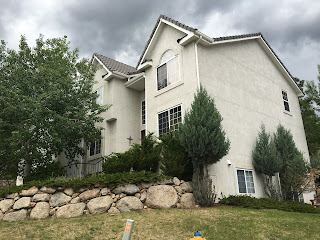