Another Race, Another Concert and a Bonus!

Last year, I ran Ragnar then went to the U2 concert. This year, Eric rounded up some friends and they all went to surprise me with a group trip to see the one band I have probably seen the most in life, the Barenaked Ladies at Red Rocks. In short, Red Rocks will ruin you for any other concert experience.

It's an awesome place to see a show. Even better with friends!!

BNL puts on a good, high energy show, but the day was super fun even before we got to Red Rocks. Krista and I met up and drove up to Littleton, where we stopped at the warehouse where Sports Authority had collected all their winter gear and was selling it off because they are going out of business. As we all know, I happen to be in the market for new skis. So, we looked and Googled and finally found someone who was not only willing to help us, but enjoyed customer service as the last vestiges of a job he was soon losing. Plus  he knew his stuff AND his family used to own a ski hill in Wisconsin.

So went went to a new, local winery to celebrate and ended up chatting with the super nice owner for a while.

We headed over to the amphitheater and after some miscommunication with Siri after an entrance was closed due to an accident (further proof computers will never take over the world) we got to the show.

Two opening bands straight out of the 80's (seriously, you've heard Howard Jones on the radio and Orchestral Manoeuvres in the Dark wrote the theme music for Pretty in Pink) and then the Ladies played straight sets of all the familiar tunes, riffed, and thoroughly entertained. Thanks friends for joining us in one fun day! 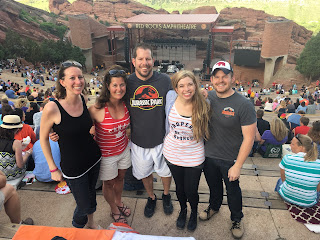