Next in Line, Please

I wrote this, and another post, on Friday, in the waiting room of the IRS office in Colorado Springs. I didn't get around to posting it, and then Sunday a mass murderer in Florida killed 49 people and wounded an additional 53. I'm not feeling the funny right now, but it seems a shame to waste a post. So, here you go. When you're done reading this, I recommend checking out Samantha Bee's rant from Full Frontal. Her thoughts are exactly mine. Sorry for the swearing. PS: I wrote all my members of Congress and plan to continue to do so until someone gives me a better idea of what to do.


I am sitting in the waiting room of the IRS right now. Today has been an interesting day.

It started with calls to the bank to resolve a stolen credit card number. Sorry suckers, you got nothing!

After that, we had to respond to the sellers of the house we are trying to buy. I think they are feeling stuck, but we really need them to complete the permitting process for the basement as they agreed to in our inspection objection. Turns out, the first owner, who was the home builder, finished the basement himself and never got the appropriate permits. The process this owner has been going through to get them has been complicated, but frankly, we need to make sure the work was done right, and there are codes for safety reasons. We don't want to take on someone else's risk just because they didn't want to do things with county oversight. Not the current owner's fault, but certainly now her responsibility since she didn't look into this or do something about it when she bought the house 10 years ago. So, that's. Little stressful and is likely going to push our closing back.

Then, the mortgage guy emailed. The IRS was rejecting his attempt to get our tax transcripts and needed our help.

So I called the IRS.

I called the IRS 15 (no exaggeration) separate times because their number is apparently only automated and I had to take flying guesses as to what information was the right information to type into the phone.. Wrong info (and remember, we've moved 6 times in a year), and the system hung up on me. Eventually, I got the system to tell me it would send me one year's transcripts to an unknown address, but not the other's.

I never got to a human.

Eric eventually got on a conference call with the mortgage guy. The mortgage guy used his banker magic to get to a human. The human was not so helpful.

The human told them that they had no record of our 2015 returns. When Eric said "umm, you cashed our check," she put them on hold. For a long time. When she came back, she read from the regulations that they have 8 weeks from receipt to post the returns.

We are 5 days away from the 8 week mark.

No matter, Eric was told that he would have to call back to see if they are ready. No, no note could be entered in our file to alert us that they were ready. No, they would not fax the records to our mortgage broker. No, they would not email our records. Also, since the online system didn't work to try to retrieve our files, we are locked out of it and we can't access our 2014 returns. No, they can't reset the system since he called. No, she won't send a note saying that they have 8 weeks to post returns and they aren't ready yet.

The mortgage guy needs these records by Monday. Why he waited to tell us of this problem until Friday, I will never know. So, off I went to the IRS building, since Eric was told that we could get the transcripts they did have and a note if we showed up in person. The IRS is on the 7th floor of a building on the other end of town. I assume that the fact that there are 7 levels of hell in Hinduism is entirely coincidental.


The very nice security guard met me at the door and asked what I needed. I explained, and he instructed me to click the key pad, hit the second button down and get the number that popped out. I hit the second button, and then realized that the first option was actually the one that I needed - the one that said "transcripts." "Oh dear," I said, "it looks like I actually should have hit the first button. Should I do this over?"


The waiting room looks like this, I kid you not: 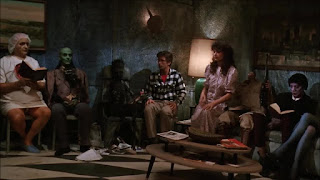 There is a man at the end of the room providing running color commentary on how quickly (or not) the people behind the counter are working. He has also provided less than savory direct advice as to what these people should be doing. Additionally, as one person was discussing the payment plan for their enormously high back taxes, he felt compelled to comment on the amount, the plan, and the chances that this debt was going to be paid (so much for the glass block "privacy walls."

The woman working behind the counter directly next to me is chastising the man in front of her for not paying his 2003 taxes in broken English. "Why you no pay?" "Why you take so long to come?" "Why you contact us in 2008, then you no contact us to now?" I'm not kidding, this has been going on for 30 minutes. I would be in tears if I were him.

The man across from me is making pig-snort sounds about every 30 seconds. There's a man 3 seats down who may be schizophrenic, and is becoming increasingly agitated. He just made some kind of threatening remarks to the running-commentary guy, but it's ok because when the security officer went to intervene, Howard Cosell over there stood up, said everything was fine and he could calm the other guy down.

A woman just walked in and gave her life story to the security officer in a loud voice while waiting to make a payment. We now all know that she has these two young kids who are with her, plus a son who is married but divorcing her daughter-in-law, but they have a kid together who called Grandma last night and demanded she take him to Chucky Cheese because he was feeling lucky.

Epilogue: I waited two hours, that felt like this:

But in the end, I got what I needed. Now let's just hope that the documentation I received is sufficient, and that the repairs go to plan and so all of this actually matters.