Battles on All Sides

We live with nature. We love it.

As you know, I was in a small battle with gophers.

However, I now find myself in a multi-front creature war.

It started with the gophers, but quickly moved on to chipmunks. Now, chipmunks are cute and squeaky, but they can wreak absolute havoc if they start burrowing where they shouldn't. And where they started burrowing was our stone wall. The same said stone wall that is directly below, and I dare say, holding back, the side of the mountain and and the carved out space on the side of it where our road runs. If that busts loose, there's a fairly good chance we end up with part of Pikes Peak in the yard, unhappy tourists and the county road commission asking us what WE are going to do about it.

We have some experience with chipmunks. We had some move in to our yard in one of our houses in 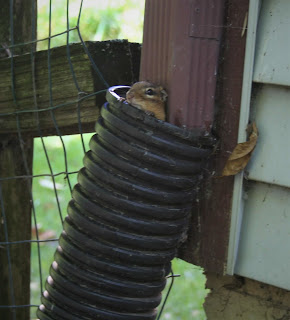 Indiana. They would literally get up on the roof and slide down the drain pipes. It was adorable, and I couldn't see offing them (although my neighbor, who had to pay to have her front porch reconstituted because of the burrowing, thought otherwise.) So we got a live trap. And back then, we would catch them, and I'd take them across the highway to a nature preserve and set them free. At that time, I named them after Supreme Court justices.

Despite the million times we have moved since then, we still had the live trap. Out it came, and ever since, I've been the de facto superintendent of the Cascade chipmunk relocation program. I'm naming after characters in Hamilton. So far, Washington, Burr, Hamilton, General Charles Lee, Hercules Mulligan, John Lawrence, Eliza, Angelica, Peggy and Thomas Jefferson have all found new lodging... in the field next door to a house with the giant Trump flag several miles away.

I thought we were winning, but maybe I shouldn't have been so quick to name my refugees after the folks that won the Revolutionary War...

They sent in the mice.

After more than four years without a trace (and if you have followed us for a while, you know we've had some experience with mice as well), there is currently an extremely small mouse prancing his or her way around our basement, acting impervious to the traps we've now set.

There is another, much larger one that's been scouting the front porch.

We may need reinforcements. Or the Red Cross.