Bears and Mice and Poop, oh my!

This blog goes through seasons.  A couple years ago, I was writing a lot about food. Apparently, now I write a lot about poop. Sigh. I guess they're related, but one is definitely more appealing than the other, although according to my blog stats, the other gets more attention.

So Eric left Saturday morning. I took him to the airport, and then had a good 7 hours on my hands because Friday the realtor called and left a message saying that he had decided to have a 6 hour open house on Saturday. Because, you know, planning. Well, after I stopped swearing and calling that lazy, good for nothing realtor every unkind name in the book, I worked on a plan to go running in the mountains. 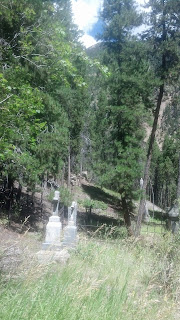 So I went out to Georgetown, Colorado, and then on to the backup plan of Silver Plume when I pulled off the highway to realize that the entire town of Georgetown was swamped with some sort of massive car show that had blocked off the entirety of the incorporated area. So, on to Silver Plume, where the internet promised me there was a 10-mile round trip trail that only had a fair amount of elevation gain and was tree covered (which was good because it was in the 90's on the Front Range and in the 80's in the mountains.) All of which was true, and it was gorgeous, quiet trail that felt so good running I could have stayed on it for a month.

Except for the copious amounts of bear scat.

On the trail I was on alone. Without my bear spray.

Well, so much for that trail. I turned around and headed back down that hill after not too many miles in. I trotted along the highway in the other direction, and took a closed road that appeared populated, and went up that for a while.

And found a nifty old cemetery that the mountain was trying to reclaim.

Now, I am something of a fan of old cemeteries. As MaryJane, Mindi, and Anna can all tell you, we lived behind an historic cemetery our senior year of college, and, on more than one occasion, either cut through it or sunbathed in it. The civil war vet residents never complained.

Anyway, I wished I had my good camera with me, but I didn't, so this was the best my phone could capture while I was running . 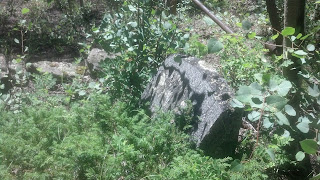 After my run, I took the slowest route possible back home, stopping for lunch supplies at a Safeway, then taking an additional hike in the foothills. After also stopping to get a new library card for the new county we are currently living in, I managed to miss the entire open house and didn't have to stalk the property like the impatient resident I can be.

I spent the rest of the weekend cleaning and organizing the garage.

The garage, as you may (if you helped us move) or may not (if you didn't and/or haven't been in our garage) know, has been something of a disaster. It's the only part of the house that we weren't required to "stage" as part of our caretaking contract. It was approximately 1/2 full of the homeowners stuff, and we've used most of the rest of it to store the things that we didn't bring into the house (e.g. 55 million boxes of books, everything from the dining room we only use a couple of times a year, Eric's desk, the washer and dryer, other boxes of stuff that we're keeping but weren't deemed absolutely essential to unpack, etc.) When we moved in, we kind of put stuff where it fit and left it. Since then, we've gone camping and hiking and have worked on the camper, and just sort of semi-opened some boxes and took out some garage supplies... and well, it was kind of a mess.

Also, none of the doors to the garage close completely and mice feel free to wander in and out. They eat the copious amounts of poison we leave for them, but the stomach aches don't seem to prevent them from returning and inviting their friends.

So, needless to say, with fall coming on, it was time to clean that sucker out. Not to mention that on Pam and Doug's recommendation (good one, guys! Highly approve!) I have been reading "A Walk in the Woods," by Bill Bryson, which is a good account of his travels on the Appalachian Trail. However, he also recounts all the ways you can DIE in the woods, including from diseases spread by breathing in mouse feces.

So! Anyway, it took me all Saturday evening to go through the homeowner's stuff, which, I realized, was more or less haphazardly thrown in there, along with empty boxes and general trash, which I took it upon myself to recycle. After reorganizing and rearranging, I reclaiming a good chunk of space in the garage, to which I put to good use, and then called it a night. I also swept out a quite a bit of mouse poo, and one dead mouse. At least I know the bait blocks work.

Sunday, I got out of the house for a bit for a showing, then spent 6 hours pulling stuff out of the garage, sweeping the enormous amounts of poo out of the garage after donning a breathing mask designed for asbestos removal and gloves that could be used to rip rose bushes out by the roots, repacking the boxes that had been opened, repackaging stuff from boxes that had broken, getting most of the cardboard boxes off the ground and stacking them strategically, either on shelves or on top of plastic tubs as needed. I also rearranged the boxes on the large wooden workbench in a strategic manner because the dryer vents into the garage, and, at some point, cardboard boxes near that vent are going to start to mold and/or otherwise deteriorate. Chalk this up to more stuff I never thought I would have to consider in a place I was living. Seriously, who vents a dryer into a garage?? Even though the stupid doors leave a good quarter inch open at the bottom, that place gets positively humid in the name of fluffy towels! No wonder the mice show up. They want a freaking steam bath!

Anyway, I had a to take a break by 4pm because there was yet another showing, so I went for a six mile run on the Greenland Open Space trail (how is it that I just now discovered this trail 6 minutes from the house?? Excuse me while I start to spend all my non-Incline time there!)

Back for another 4 hours or so of sweeping, arranging, tossing out yet another dead mouse, and, oh yea, smashing my hand hard enough that I busted my wedding ring (thank goodness for Purple Mountain Jewelers in Monument who can fix anything) because I was dumb enough to not take it off while moving ridiculously heavy boxes of books... but finally, everything was clean, organized, accessible, put away, and making my OCD happy.

And tonight, while typing this very blog, a mouse ran across the living room.