We talk about poop a lot in this house. Obviously. Because, as we all know at this point, poo, literally and metaphorically, keeps happening here.

You know where this is going, right?

So, a couple of weeks ago, the homeowner sent workers over to the house to, sadly, closed in the unique selling feature of the basement, turning that particular eye catcher into just a regular old closet.

Well, a closet with random pipes sticking out of the walls and floor, but since there's no lighting in this particular closet, you probably won't notice if you come to look.

Anyway, it took them a number of days to complete the framing, drywall, texture, and paint. During this time, there was frequent ins and outs of the our via the garage. Because closing doors is both difficult and inconvenient, the workers generally left the door into the house wide open.

Yep. Mouse. Or mice. Or who knows, a freaking colony of vermin. I don't know, but they started pooping, which is how we figured out that they had made the journey from the garage into the house (well, that or from the numerous holes in the house or from under the front door, which has gaps, or the kitchen door, or...) This is unacceptable, and therefore, we sweeped all the floors, then sanitized everything. Floors, baseboards, anything disgusting vermin might have passed near. It was an all out assault of cleanliness around here. We then brought out the poison bait traps. Thinking that we didn't want to have the bait blocks on the actual floor because they could leave trails of poison, we put out those devices where you put the bait block in the plastic box, and the mouse squeezes in there and eats, then goes off to die.

The mouse took a dump on top of the trap.

Ok, so much for the sanitized version of the bait traps. We put out just the actual blocks. Since the house is for sale and we have to keep things "show ready" at all times, we hid the blocks behind the garbage can.

The mouse pulled the block out from behind the garbage can, dragged it and left it out in the open in front of the bathroom cabinet. 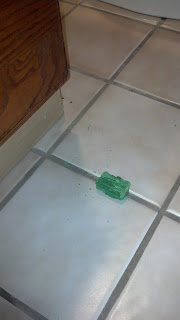 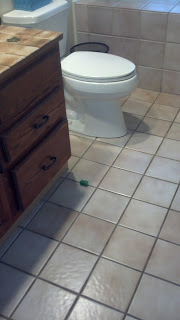 Yesterday was the first day that the blocks hadn't moved about the house. This morning, there was no poop to clean up.

I'd say we'd won, but last night, this was on the table next to the front door: 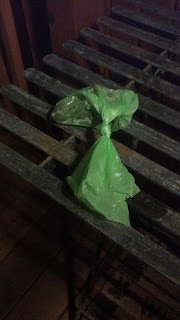 Someone left us a bag of poop on the porch.
﻿