I'm Alright, Nobody Worry 'Bout Me

I have leveled- up on the Bill Murray scale of existence. 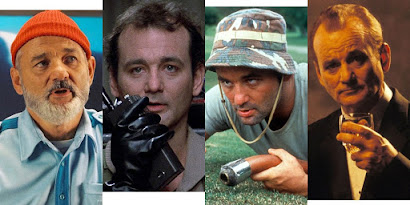 Or have I leveled down? Honestly, I'm not sure which way the scale goes, but I'm firmly at Caddyshack.
I'm doing battle with gophers.
We've never had a gopher problem in the four years we've lived here. Now that I've spent an entire summer cultivating a garden (which isn't easy to grow here in the rocky granite soil of the mountain), endlessly planting, weeding and watering my way through this never-ending quarantine, the vermin have decided to dig happy little homes underneath my flower beds.
They took out five of my sunflowers like they never existed. I couldn't understand what happened - I have been diligent about spraying and sprinkling animal deterrent (a non-toxic but potent blend of wolf pee spray with garlic and capcacin granuals) and the deer and raccoons have mostly left the plants alone. Additionally, there were no hoof marks in the soil around that area of the garden.  It was like I had been on the wrong side of a herbaceous Left Behind novel.
Then, on the largest, most beautiful and hard won sunflower, I noticed gnaw marks at the bottom of its 6 foot stalk. Someone had been eating my flowers. And, there was a suspicious hole right next to the stalk.
I sprayed it furiously with repellent. Undeterred, the next day, I found additional tooth imprints. I sat on our front porch, working... and eventually, out of the corner of my eye, the sunflower began swaying in the opposite direction of the wind.
Gopher.
I approached, and it kicked up dirt to cover its hole, disappearing down its warren or burrow or whatever you call it.
I sprayed more.
No luck.
I put out our live trap, complete with a handful of sunflower seeds.
The gopher (unlike the bevy of chipmunks I've relocated in recent weeks - more on that later) ignored the snack.
I resorted to taking out the hose and flooding the hole with water, collapsing the entryway, and ensuring what looked like an eviction. I thought I had success. 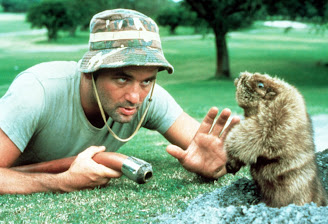 Nope.
I have tried to be reasonable. I have offered alternatives. Had the chubby rat taken me up on my food offering, I would have been happy to rehome them.
I took more drastic measure this morning... so I got that going for me.
We'll see if I have better luck than Carl.
PS: If I get to "What About Bob?" on the scale, someone stage an intervention.