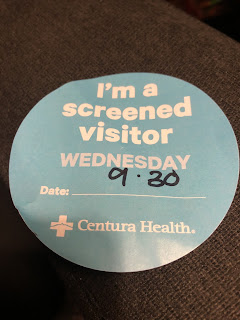 Well, we made it to Friday, which after Tuesday's televised nuclear waste spill, I wasn't sure was a certainty.

Eric went in for a hernia repair on Wednesday. We were up early in the morning to get to the hospital, which is a little unsettling in and of itself during the time of Covid. We passed our screening, and went to the outpatient surgical center to check in. They took Eric back and I had some time to work before they had him settled in pre-op and I could go back to see him. We saw the doctor, hung around with little else to do but wait, and a couple hours later, they wheeled him off. I have to say, there's a gut check you have when the anesthesiologist comes in and informs you that this form of sedation includes a tube down your husband's throat and the doctor "breathing for you." I maybe could have done without that. 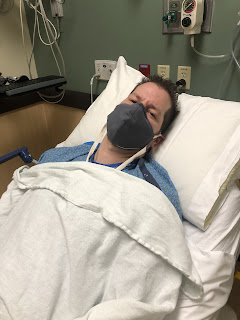 I sat in the lobby and worked, as the minutes and hours ticked by. It was quite a bit past when surgery was expected to be done, and the patient board kept noting "in progress," so I kept working and waiting. Finally, the doc came out to see me and told me everything was fine, but they did find a second area they had to repair, hence the additional time. But, things went "perfectly" and “oh, here's pictures!” I don't think I'll be framing those, but now I know what a closeup of my husband's intestine looks like.

After another hour, I got a call from recovery. Apparently they couldn't find me in the lobby (how? I don't know. I literally hadn't moved. I didn't even go pee and we all know how much discipline that takes for me), but it was time to go back. Eric was out of anesthesia, but still pretty groggy and not feeling great. It was a couple more hours before we were able to 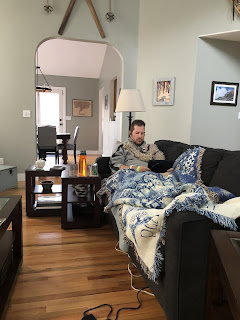 leave, and we got the fun surprise that the anesthesia had affected his legs, and they weren't working so well... thank goodness for the wheelchair down! We got home and I acted as human crutch to get wobble-walk in the house. He slept for a while, and then later in the evening crutched out to the couch to sit for a bit before it was back to bed. About midnight his legs were back to normal, so while he needed some help getting up and down, he could at least walk on his own.

I had cleared my schedule for Thursday, so the day was mostly working, with occasional times to help Eric get up and down, have some meals, and insist he drink water like the nag-I-am. In the afternoon I ran to the store to pick up some medicine, and by special request, gummy bears. My work ended up being kind of hectic with some urgent-crisis-type stuff I was dealing with (crises are never convenient, but I would have perhaps preferred a calm no-news week), so I was trying to get out and back as quick as possible.

I had gotten to the top of our driveway when a dog popped out of nowhere, right in front of the car. She started prancing around the car, and darting in and out... and I can't go anywhere because I'm seriously risking running this pooch over- in fact, she disappeared at one point and I thought I did!

Fortunately, I was wrong and as soon as I got out of the car, there she was, trying to get IN my car. I tried to get her away, but she was not having it, so I jogged down the driveway and she ran down with me, all the way to the front door, where she stood as if she expected to be let in.

Please note that I do not know this dog. 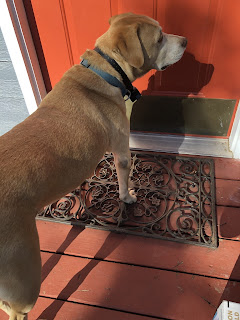 I tried going back up to my car and she followed. I clicked the garage door open and she ran down the driveway and into the garage. By the time I got there, she was waiting in front of the door to be let in the house. I checked her collar and she has no tags, although she did have a shock collar? I took a photo of her and asked Eric to put it up on Nextdoor from his location on the couch, and see if anyone posted about a missing dog. No one had, and my new best friend was not leaving the yard or my side.

Eric suggested I tie her up so she didn’t get hurt while we found the owner, but I needed to do so away from the house as we have bait blocks around, the latest landmines in our ongoing vermin war. So I found some rope in the garage and made a long lead for her and tied her to the popup camper.

We all know how proficient I am with animals, right?

The dog proceeded to whine piteously from the moment I walked 4 feet away from her. I brought her some water, but the whining continued. I got out a mat for her to sit on, and she cried from the moment I left. Why? I don't know and I have no way of knowing because DOGS DON'T TALK. Eric had no responses on Nextdoor and I had this pitiful creature in the yard, who only seemed happy if I was right there.

So I got Eric up and back down, took my computer and sat out there in the driveway with her.

The dog decided that to be happy, she needed to be sitting in my lap or laying on my legs. Great. I have become the therapy for this traumatized animal. 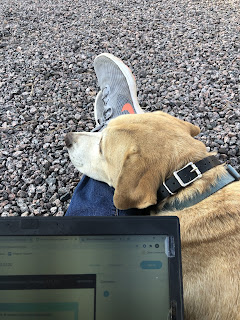 Finally, I called Animal Control because I didn't know what else to do. But, because of where we live, they preferred  we KEEP her, or if I "really needed to" I could bring her to the Humane Society, but they closed at six.

By this time, it was getting to the point where I had to leave for the Humane Society to get there before they closed. I got Eric up and down again, and let him know I was going to take her. I didn't feel like we could keep her - although we did have a mild conversation about adopting her if her owner didn't reclaim her since she clearly liked me and she seemed nice enough. But, Eric's just had surgery, I didn’t know if this dog was ill or would jump on him, or god-forbid, had fleas (which by that point I would have too, since she sat on me for an hour). It was just a bad time to have a strange dog in the house.

I literally have my keys in my hand and am untying the dog when Eric called me from his roost in the basement. He found the owner, or at least he found photos of the last time the dog got out and figured out who the owner was. He told me not to take her so we could give the owner a chance to come get her. He messaged the owner directly, and when he didn't get a response, started contacting neighbors on Nextdoor to see if anyone had a phone number.

It got late, and I had to text our wonderful neighbor and beg some dog food, which she was gracious enough to bring over. The pooch scarfed it down like she had never eaten before, which was clearly not the case since she had... a thyroid condition?

I made Eric a lasagna and got him dinner, interrupted several times by an unhappy dog who went from crying to barking at my absence. Once I daned to feed my poor, recovering husband, I went back to attending the dog, mainly so she wouldn't annoy the neighborhood.

We waited some more.

By this point we were hanging out on the porch, and doggo-o was not happy that I wasn't giving her ALL THE TREATS since she knew I must have some, as our kind neighbor brought them over. She pawed at me and gave me hang-dog face. I was impervious.

Finally, it got too cold to be outside, and so I brought the dog into the garage. I pulled out some more mats and laid down a towel. I got her more water and then I went inside myself.

And promptly went down to the basement so I couldn't hear the crying. She settled down eventually. I took her (and Eric) to pee, and then both again before bed.

Yes, bed. Because it was now 10pm and I have become a canine caretaker in additional to temporary assistance to the poor and swollen. I got out a moving blanket and made the dog a bed, got worried that it would be too cold in the garage so put a space heater out there, got everyone settled, and down the three of us went.

The owner picked her up about nine this morning.

"She usually comes home" he commented. Because I am not our president, I was able to restrain myself from saying cruel or unnecessarily snippy things like, "not my responsibility to know what your stray dog does when she comes whining at my house asking to be let in and not leaving my yard," or "maybe if you paid better attention to your pets, I wouldn't have had a sleepover with your pooch" or the obvious "WE LIVE IN THE WOODS. WE HAVE PREDATORS AND YOUR FAT DOG IS BASICALLY CANINE BACON TO A MOUNTAIN LION."

Eric is doing much better today. We both got a shower and he had a work call, which took most of the energy he had, so we reinstalled him in his recovery position, poor guy. He hates needing help and not being able to do thing, so needs a reminder from time to time that he had a robot crocheting his insides 48 hours ago, and maybe that means that he needs all his energy to heal. Florence Nightingale probably would have kinder things to say, but clearly, I'm not her.