Allies and the Axis

Our existence on the side of this mountain has become a giant game of Risk, with us on one side, and an increasing number of aligned forces on the other. It started with the gophers, then moved on to the rest of the vermin filum.
They have added reinforcements.
On Saturday, we got home from the farmer's market, and I noticed that our composter had been tipped over. Because I'm a bit of a granola, save-the-earth-hippie-with-slightly-better-hygiene, I have been composting for years. Or, as Eric used to call it "throw stuff into the woods," which is only partially true. I did compost over the back fence when we lived in Indiana, but I had a compost box when we lived in Monument. When we moved here, I had a pile for a while, and then friends of ours gave us their multi-gallon composter that can be spun easily for mixing. It's great.
Except it's heavy. And fortunately, heavy-duty.
But I picked it up and put it back in its spot next to our shed. The kids from below had been in the yard looking for their cat (eek, maybe our lazy predators got on their game finally?) so I thought that maybe they had tipped it.
Monday, it was tossed halfway down the hill. Half full of compost and weighing a metric ton (well, maybe not exactly a metric ton, but it was heavy). 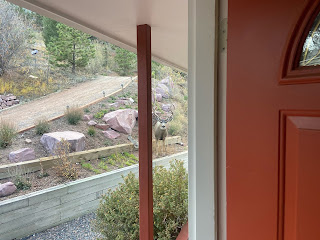 I tried hauling it back up the hill, but I had to do this alone since someone is still on lifting restrictions. Needless to say, that didn't work, so we had to pull the old HailNo tow-strap trick, albeit without a poorly positioned telephone pole this time. We got it dragged back up the hill, and Eric suggested we strap it down so it can't go flying again. We secured it with a cable to a tree and that was that.
Tuesday, Gary, the resident buck, showed up in the
garden and ate every last one of the carrots that were still growing in there. Not a single green leaf is left.
This morning, the composter was flipped over and dragged to the other side of the tree from whence it had stood. Fortunately, the cable held, but the trail cam  and the two puncture marks in the lid gave us proof of who was desperate for decomposing potato peels. 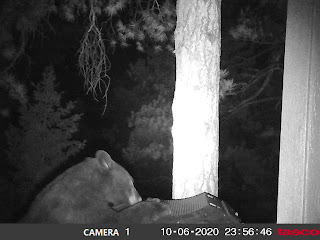 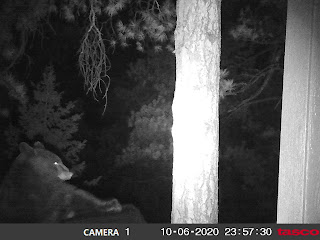 I'm not sure if we are the Axis or the Allies in this particular scenario, but I am pretty sure...
We're losing.