To White Women, From a White Woman

White women, we are not exempt from white privilege through our status as women. Our status as white provides us with advantages not afforded to minority women and men.

But white women, we know what it is like to be treated differently. Albeit not the same kind of systemic racism and oppression as minority men and women in this country, but we have a peek into difference. We've only had the vote for 100 years; women only make 77% of men's salaries; we regularly face verbal, sexual and physical harassment at various points in our lives. That tiny glimpse should help us understand, and stand in solidarity with, minority men and women. We should be all over the fight for equal treatment. We should be outraged when someone's minority status causes them harm or death for simply existing. We should be screaming for justice.

White women, we should be ashamed. We have failed all the people who have life infinitely worse than us. We've taken advantage of our privilege, stayed silent when it conveniences us, and abused others as surely as if we had knotted the noose ourselves.

Example 1: Regardless of what you think of the decision the police officer made to arrest this woman for mouthing off and refusing to sign a fix-it ticket, it took fleeing from the police, refusing to get out of the car, resisting arrest, and kicking at the officer for him to eventually pull the trigger on the taser.  I am convinced the actions of the officer would have been different had this person been African-American. She knew she could get away with her behavior. She knew the police officer wouldn't use deadly force on her, and she treated him terribly. Whether she actively understood it or not, she was using her white privilege in this situation, and she was absolutely and undeniably wrong.

Example 2: This white woman absolutely did know exactly what she was doing in using her white privilege. She told an African-American man, a bird watcher in Central Park, she was going "call the police and tell them an African-American man my threatening my life" when he asked her to put her dog on a leash - which is a Central Park ordinance, and well within his rights to ask as an equal patron of the Park. In the video, you can see her becoming increasingly hysterical on the call, and flat out lie to the police in what I assume was a bid to scare this man into retracting his request. Maybe she was embarrassed over breaking the rules. Maybe she was angry and wanted someone to hurt this man. I have no idea; and there's no excuse for this kind of behavior.


She lied, she used white privilege to entice the police into coming to whatever fantastical rescue she had in mind. She potentially put this man in danger. Cops are trained to respond to threats, and act toward the safety of a victim. She set this man up to be taken down by police officers predisposed by her characterization and testimony to believe he was a threat. They didn't need to be racist: she already covered that for everyone by juxtaposing her frightened, hysterical white female victim persona with his African-American threatening maleness. Make no mistake however, the bird watcher, Christian Cooper, was completely aware of the role racism played in this incident. In an interview with NPR, he said: "I'm not going to participate in my own dehumanization, We live in an age of Ahmaud Arbery, where you know, black men are shot, gunned down, because of the presumptions that people make." 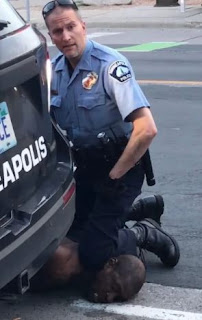 What, you've never been handcuffed and had an officer kneel on your neck while you begged that you couldn't breathe, until you passed out and died like George Floyd did yesterday? None of your friends have had that experience?

Yea, me either. Because that's part what it means to be a white woman in America. Our privilege is showing.

Let's start getting comfortable with being uncomfortable.

Let's be better than this.