Approximately seven million years ago, my colleagues and I were in our office. Yes, that was back in old days, where we went to places called "offices" and we didn't feel eminent death hanging over over if we got closer than 6 feet to someone. It was getting close to the end of the day (remember when "days" had "ends" to them?), and my friend Jen was heading out. "I have to try to go find toilet paper," she said. "We are actually almost out." This was at the beginning of the panic, when toilet paper disappeared from shelves like it never existed, as did hand sanitizer, and cleaning wipes. It may still be that way but I have no idea. I haven't been in a grocery store since this story took place. Our other friend Sarah noted that she had gotten some the day before. Since Sarah and I live in different parts of town from Jen, we both said we would look around us if Jen couldn't find any.

I went on to make an evening run at the Incline, in oblivion that this would be one of my last opportunities to make that climb. When I got done, I had a text from Jen with a photo of empty shelves. No toilet paper. Since I was still out, I stopped at a grocery store on my way home. 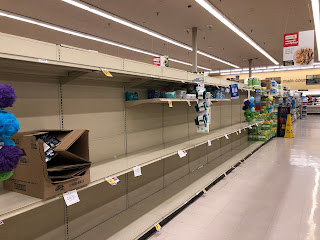 Nothing. The tissue aisle was stripped to the wall like an abandoned house full of copper pipes in Detroit.

I stopped at another shop, and same deal. Sarah didn't find any either.

Jen didn't have any luck the next day, but had an emergency stash of Kleenex if it came to that. I decided to check the grocery up here, just in case. I pulled into the parking lot and noticed the flurry of activity. There were people with literally EVERYTHING in overflowing carts, speeding out of the store. It was relatively intense for a sleepy mountain town. I walked in, walked right to the tissue aisle...

And spotted the last two bags of toilet paper. 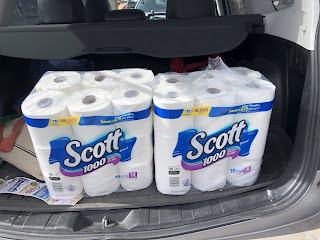 I didn't hesitate. I grabbed both, turned on my heel, used the self-checker, and hoofed it to the car. It may be the only time in my life I was concerned about being mugged by Baby Boomers in the parking lot... it was clearly that kind of vibe.

I texted Jen a photo.

Sarah, of course, immediately responded with the insinuation that I was black marketing TP like some kind of dealer. I admit, this does bear a resemblance to that.

Anyway, I got the toilet paper to Jen and all was well. We locked down the next day and I haven't seen her since. She only needed one of the bags, so I had an extra, and it turned out no one I knew needed any. I put the bag in our bathroom, where it sat for 75 days, or 80 days or whatever it has been since the purchase was made.

I finally opened the bag this week, and distributed it around to our bathrooms.

I have no idea why Jen is still my friend.

This. Is. The. WORST. Toilet Paper.

In my quest to find anything, I failed to be suspicious that ALL the other toilet paper had been purchased, and these two bags were the only ones left.

Scott's is clearly the Dasani of toilet paper. 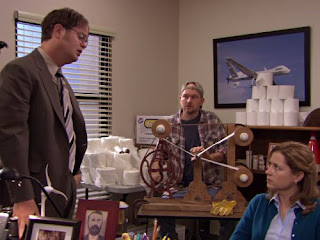 This stuff is single ply, and not just like any single ply. Single ply like what's leftover when Dwight Shrute has Nate de-ply the supply in the Office.

It may actually be the consumer-roll version of truck stop toilet paper, and not the nice truck stops like the Flying J or Pilot either. The creepy stops that give you a key on a baton and make you walk out back, such that you aren't sure if you are supposed to use the key to open the door, or they just gave you the baton for protection because the lock doesn't work anyway.

Once we figured this out, I texted Jen immediately.

"Jen, I sincerely apologize. We opened the other bag of toilet paper today, and I had no idea it was so bad. It may actually be state highway rest stop tissue. I am so sorry."

She, of course, was super gracious, admitted that this would NOT have been their first choice of paper, but beggars can't be choosers.

However, I'm pretty sure even most beggars would have been like, "umm, do you have something else?" Jen is clearly a saint, as she never even mentioned this disaster of a situation. Bless her.

PS: I should also note that Eric has removed the offending paper from his preferred bathroom, and replaced it with better toilet paper we had elsewhere. I apparently will be using all 18 rolls myself.