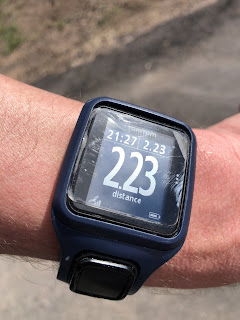 2.23 miles to represent February 23, 2020, the day Ahmaud Arbery was shot and killed by two white racists who hunted him down, and then evaded justice for more than two months while cronies in the District Attorney's office covered up their crimes.

We run. Eric and I set out in the middle of a sunny day, with a strong breeze and low temperatures. A great day for a run.

Just like the middle of the day on February 23, 2020 in Satilla Shores, Georgia.


We don't usually run together - Eric for two years straight runs on the treadmill, while I prefer running outside. We got going, and it wasn't necessarily a comfortable run. He's much taller than me, so I took more steps to keep up with him, but he isn't used to running outside, and traversing the neighborhood kept his breathing heavier than usual.

But it wasn't supposed to be a comfortable run.

We ran in silence, and kept our masks on whenever we passed near anyone else. Ahmaud Arbery was forefront in our minds as we ran. I thought about his mom, his family, and the grief that must be untenable, compounded by a lack of justice.

I thought of the numbers of young men and women who have rotated through our home over the years. Young people of varying races and genders and identities, full of promise, full of potential. I thought of the number of texts I had sent over the years, wishing one or the other a happy 26th birthday. Of weddings we've gone to, of jobs and promotions we've celebrated, of babies we've welcomed.

Of all the things Ahmaud Arbery will never get to experience.

All because two racists decided that they were going to flex their power, grab their guns, and see if they couldn't just put a black man "in his place." Why?

"He's a black man running down our street."

Ahmaud Arbery didn't get to finish his run that day.

We ran in a neighborhood where there is one house that insists on flying a Confederate flag. A house far enough away from ours that we don't know who lives there, but we see it. We ran by it.

And it reminds me that what happened to Ahmaud in Georgia could happen here.

And I'm ashamed of that. Every time I run by, I think of my friends of color, and I know I'm letting them down.

If I were a stronger person, I would knock on the door, and engage the owners about it. But I'm afraid. Not afraid of confrontation: afraid they will hurt me. I assume anyone who has the audacity to publicly fly that symbol of hatred would have no problem harming someone who confronted them about it. Especially someone they don't know and have no relationship with.

So I pray for their neighbors, who have a "Fauci 2020" sticker on the back of their car, that maybe they are the kind of engaging neighbor who gets to know someone, and then starts a conversation that changes hearts.

Changing hearts isn't easy. And sometimes people refuse to even try to listen or understand. Eric's been having those conversations this week, with people we DO know, who insist racism doesn't exist, and "people just see what they want to see." When engaged with the stories of the journeys we have been on with people we love and care about, with statistics, facts, and logic, these people have just doubled down. They have searched the internet for the one Fox news story with the one black man in America stating that "racism isn't a problem." They deny the facts. They dismiss the stories. They refuse to consider the possibility. We've debated between us whether this is someone who "just doesn't understand" (the kinder hearted of the two of us), and bigotry.

I would argue that someone who refuses to consider that someone else's lived experiences might mean that their righteous position might actually be born of ignorance and be willing to go on a journey of understanding is the very definition of a bigot.

And that bigotry underpins systematic racism, supports white supremacy, and ultimately leads to the death of innocents, who were killed for daring to be black (in public, in private, in their own homes, while exercising, while breathing. The list goes on.)

In the meantime, we sign petitions, we speak out, we engage with those we know, we love people, we advocate for structural change.

We Run With Maud. 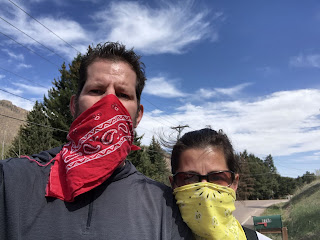