UnRace Report: 20K to Kick My A

Today I was scheduled to run the Cheyenne Mountain Trail Race as a fundraiser for Achilles International, Pikes Peak Chapter. I started volunteering with Achilles as a guide, meaning running or walking with an Achilles athlete who has a physical or cognitive challenge. I really enjoyed going every Monday evening, and am looking forward to returning when its safe to be back together.

The race itself was postponed until October (single track trail is not great for maintaining 6 feet of social distance). However, I got up this morning thinking I would run a self-supported "race" instead, since this had been on my calendar and a part of my training plan. So I was up, geared up and out the door relatively early, thinking I would go from my house to the trails in the mountains above us, taking Mount Esther trail to Ring the Peak, which is a trail system that literally goes all the way around Pikes Peak  - so I'd be sure to have plenty of trail to make the mileage.

I should have perhaps considered that starting at my house is 1,000 feet higher than the start of the race, AND the trail I chose included the first two miles at a significantly more steep and consistent uphill than the race.

Also, it rained all night last night, and was super humid as the sun started to rise and evaporation started happening. Growing up in the Midwest, I should be used to humidity, but eight years of living in this mostly arid state have gotten me soft on humidity. 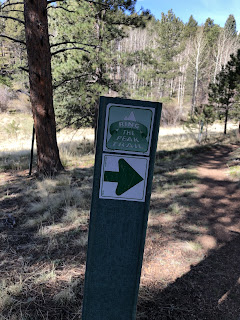 I slogged out the initial two miles uphill, and thank goodness the view is beautiful. Obligatory photo from the outlook rock, and make the turn to the last spur before picking up Ring the Peak. Single track through a high meadow and aspen grove where the trail rolls for a while in a mostly manageable cadence. However, at some point you turn a corner and have to follow a set up power lines uphill over decomposed granite, which is not fun.  The blessing however is that there's a rolling downhill that follows.

Somewhere around mile 4 I grabbed a PowerBar out of own personal aid station (Camelbak), which mileage wise felt early, but I most assuredly needed it. Of course, pulled over to the side of the trail munching away the ONLY OTHER RUNNER OF THE DAY passes me, and I'm sure wondered what this wimpy lady was doing out in the woods.

Onward to new trail for me - and it was gorgeous. Rolling single track that cut through boulders and only occasionally caused me to trip and throw my bear spray, but unlike the ground eater I took last week, no actual tumbles. 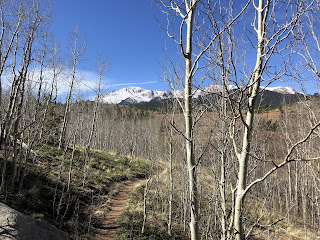 I popped out around a corner to a stunner of a view of the peak, near the reservoirs and the Pikes Peak Highway. Some more twists and turns, and the trail pops you out onto a dirt road through what appears to be a staging area for mulch and extra gravel? It was kind of stinky and not particularly picturesque... and eventually dumped me onto another dirt road. At this point I stopped to check my maps, because even through I can see the trail markers... its a dirt road. I had just enough coverage on my phone to pull up Google maps, at which time I realize instead of doing an out-and-back (which I do ALL THE TIME), I could actually make this a loop by going down Catamount Trail, which would pop me out into Green Mountain Falls and I could run home from there.

Well that took about 2 seconds to decide to do. The only thing is that I've never actually been on Catamount Trail, but I know it intersects with Ring the Peak so I should just run by it! And, other people have told me I should run it some time, so it should be good!

More dirt road running, and an extended downhill period where I pretend I look like a bad ass out there, since I can actually run a decent pace downhill on relatively level road. Somewhere at the bottom, it looks like I turn off for my trail... except it isn't actually named as a trail, just the creek name. But there happens to be a guy out there with his dog, and he doesn't look particularly scary or intimidating, so I ask him if I'm going the right way. I'm sure he thought I was either a weirdo or a tourist, but he did confirm that I was on the right trail, so off I bounded (bounding mainly because I wanted to make sure he knew that I was a runner and not jut a lost lookie-loo).

The bounding didn't last too long because it turned out that for a while there were some pretty big boulders to get around. I ran when I could, climbed when I needed to... and starting coming upon other people.

I perhaps should have considered today was a really nice day and other people would maybe want to go hiking.

For the next couple miles I played run, hike, jump rocks, and pull my bandanna up and down to get around folks. The trail was pretty, and also narrow, so I had to get creative at times to get out of the way of the uphill hikers. Did you know that uphill has the right of way? This is different than Pikes Peak Marathon rules, which gives the right-of-way to downhill runners. I didn't know this until one time I was slammed into whilst downhill running by an uphill hiker, who didn't move an inch out of the way (when he could have safely- and I had moved out of the way as much as I could have without falling off the side of the moutain), and then screamed at me that "uphill has the right of way, always!" I got home and looked it up. He was right... but I will contend that I think he hit me intentionally and the screaming, even though he was right, was a total jerk move. I resolved to never be that guy. I also now jump out of the way for uphillers.

I had one mishap, where I started to go down on my backside coming down some rocks, and caught myself with my hands. Unfortunately, I left some skin on the rocks, in just the right place on my palm... that I started bleeding like a stuck pig. I mean, blood running down my arm, sticking to my fingers like something out of Helter Skelter... bad news. Eventually I got to a stream where I could wash off, but I'm hoping that anyone I passed before then was too concentrated on their own feet than on the blood-covered crazy lady bombing down the trail.

Eventually, I was dumped out onto the road, where I had about a mile and half of paved road to travel to get through town and back to the trail on the other side. By then, my legs were pretty dead and running on pavement in trail shoes was less than my favorite thing. But I slogged it out, got onto the trail, and then wove my way through the neighborhood to get home.

By the time I got home, my legs were so tired they didn't even flinch getting into the ice bath. I told Eric the next time I tell him I'm going out for a run on Mount Esther, he can call my stupid.

Which probably will be soon. After the ice bath and shower, we took a drive out into the mountains. At one point Eric looked over and said "you're thinking about wanting to run all those, aren't you?"