Leveraging What You Can To Stretch What You Have

I like travel. In fact, some recent study said (according to Eric, who was likely reading me a headline off Facebook, so I don't know about the scientific reality of this statement but I believe it) that travel makes you happier than just having stuff. This is most certainly true of me, and especially so if the travel involves being outside. Bonus points for sleeping in the outdoors.

Three-day weekends are key travel weekends in my mind. These rare events allow us to go further without burning precious vacation days. I am additionally lucky enough to be permitted to work remotely, which I do not take for granted. I try to be as connected as possible and show purposeful accountability for my time out of the office. I feel a need to show that I "get things done" when not in the office, because I never want someone to believe I'm gaming the system or taking advantage or abusing the trust I've been given in working remotely. If I want to be "off" when I take vacation days, I better be "on" on my work days, wherever the work occurs.

And, since Eric is a storm-chaser and has equipment that allows him to connect while chasing, "working remotely" for me sometimes means really, really remote. Like Utah desert remote. So, for one of the few times this summer since purchasing our own home, we set out, heading for Capitol Reef National Park.

The park is about 8 hours, or one full workday, away from our house. We were up and out by 6:30am, since I had a 9am phone call to take and we wanted to make sure that I had clear reception, just in case the cell phone booster in the car wasn't enough (there are very few spots where it is "not" enough, but canyons through the mountains are some of those places). Eric drove the whole way, and I worked on editing PowerPoint presentations and obsessively wordsmithing my own work, emailing it to my boss via car wi-fi (Thanks Verizon and tethering), then reworking the same slides again.

Did I mention what we were driving? I know, every assumes that HailNo made the journey, but this time, not true. No, we didn't pull the pop-up with the Civic either. HailNo has been the unfortunate recipient of a faulty airbag. We received the recall notice about a month ago, along with instructions not to allow anyone in the passenger seat until the airbag was replaced. When was the replacement airbag available? They didn't know.

Well, that wasn't really a workable situation for us, but Subaru was gracious enough to provide us with a loaner vehicle from a car rental agency to use in the interim. Score! Keep the miles off our cars! We started with a mid-size SUV, but after several weeks, Eric realized that the car was overdue for an oil change. He took it to the rental car place, and the traded it out... for an enormous, brand new truck, complete with a hitch and 15 miles on the odometer! Score! So, we hooked up the pop-up to the truck, installed the tech hoojamajiggies that allow the phones and internet to work in the car, and off we went. We put something on order of 1,200 miles on that truck in the course of the weekend. Somewhere, a rental agent is crying, but HailNo and the Civic are cheering. 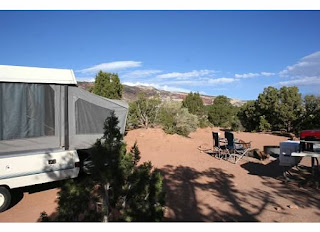 We have been experimenting with free camping this summer. There are lots of places to boondock, mostly on BLM and Forest Service property, but Capitol Reef had an actual campsite (read: designated camping spaces with firepit and picnic table) that was designated "primitive" and free (but had vault toilets. Bonus!) It was, by my estimation, 10 miles south of the visitor's center, according to the map in my National Park Guide. 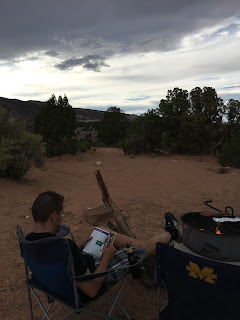 It was more than 10 miles. It was like 20 miles, the last 15 of which were increasingly rough dirt roads. As we drove over the washboard, I saw the pop-up bouncing around behind the truck like a wagon being dragged through the woods by a running child. But we got to the campsite, and snagged the last free spot available. Double weenie score! The campsite was gorgeous! And did I mention free? Granted, it was excessively remote, and you could have totally buried a body on it and no one would have known, but man! What a place to be buried! We were on the backside of the "Waterpocket Fold," a literal fold in the earth's crust caused when two tectonic plates ground into each other and caused the earth to rise up in a similar manner to what happens when  you lay a towel out and then push both sides toward the middle at the same time. We looked over a shallow wash, and beyond the fold rose up to clear, clean skies - literally. Capitol Reef National Park is known as having some of the cleanest air to breath in America, and the skies are dark enough at night to garner a special rating, and some amazing views of the Milky Way, directly after nightfall. 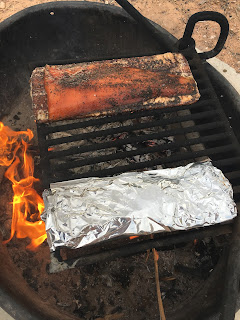 Last year, we invested in a cooler upgrade, when we saw a "marine ice chest" on clearance. This is supposed to keep ice for 5 days, and while we stretched it to its limit in the desert, we made it, which meant we could cook food each night over our fire or on the campstove, and cook we did. As it happened, cedar-planked salmon was on sale at the grocery store, and over a campfire, it may be the best meal we've ever had, paired with a hobo-pocket of potatoes, onions, and zucchini. Oh, oh my.

My next post will tell you more about Capitol Reef, but I think it's fair to say that for this trip, we leveraged everything we could and got the most bang for our few bucks.