Capitol Reef National Park, or How My Husband Gets to Go to a Bowl Game This Year

We arrived at the campsite late-afternoon on Friday. We set up camp, which took slightly longer than usual given the short space we had for the pop-up (we were the only trailer in the primitive campsite, which was best designed for tent-camping), and we never got exactly "right," sleeping with our heads downhill. We debated going the miles up to the visitor center to get water, but ultimately decided to stick around camp for the evening and just use the six liters or so that we had brought with us. We made dinner (that gorgeous salmon), and relaxed, reading by the campfire, enjoying the light breeze, and going to bed at an hour amenable to my 93 year-old grandmother.

Saturday morning we were up, and breakfast was coffee and granola bars, since Eric was confident that the salmon was still swimming around in his stomach. We headed up to the Visitor's Center for water, a map, and, as it turned out, salsa (more on that in a minute). The ride was significantly easier than the night before now that we 1) knew how long to expect the road to be and, 2) didn't have the camper with us. We got our provisions, and the first stop on today's adventures was... an orchard.

I know, orchard in a desert? Yep! As it turns out, there is a river that runs through, and along the river, Mormon pioneers had set up homesteading in what was eventually called Fruita, Utah. According to the movie at the visitor's center, life in Fruita was "simple, but rewarding," with Mormon pioneers planting orchards and making out a living. However, the movie also referenced that there were never more than 10 families living in Fruita at one time, and the homesteads are now all abandoned, so I'm not exactly sure how "rewarding" this all was...

Anyway, the orchards still exist, and you can go pick your own fruit. Peaches, apples and plums were all in season, and we loaded up. We then went on a scenic drive, keeping one eye on the weather (which looked threatening at several points) and going on a couple of hikes through the waterpocket fold. The waterpocket fold is a bit like Arches, Canyonland, the Grand Canyon and Badlands National Parks all combined into one. Today's hike was super awesome and took us around canyons, badlands, and then a six-ish mile hike out to a great big arch that Eric WALKED ON TOP OF (because it was allowed, unlike Arches), and I may have had a little mini-panic attack over when he looked over the edge and from my vantage point I was completely convinced he was going to fall off of (face it, I can't, and shouldn't, live without him.) But, once I stopped visualizing the imminent death of my best friend and life partner, it was a cool view.

Remember I just said that.

We hiked and enjoyed the day, and it didn't rain on us. We headed back to camp, made dinner, watched the stars come out (the Milky Way was super awesome), and spent a peaceful night sleeping while the blood rushed to our head given the downward-dog-angle of the pop-up.

So, since I saw a photo (Saturday morning) of Lower Muley Twist Canyon, I decided I really wanted to see it, since it reminded me of Antelope Canyon, which is not in the park but is similar in that they are narrow canyons of red rock and I hadn't seen either. So, we talked to a park ranger about the hike, and he recommended doing the upper canyon first, then coming back through the lower canyon so you would do the climbing first. Cool, good advice! So, we decided to do it on Sunday.

To get to the canyon, we had to take a 4-wheel drive road that went up a series of switch-backs, then cut over to the canyon, which required high-clearance. Fortunately, we had the truck... although I did have to get out of it once to guide Eric around some massive rocks without bottoming out of putting scratches on that thing we would have had to pay for. Maybe this should have been my first clue, but I'm not a follow-the-clues kind of woman, I guess.

We got to the trailhead, where Eric realized what we apparently had not talked about... the trail was 9 miles long. Well, I knew it was 9 miles long? I like long trails. But, he was willing to go along with me.

So, we started out. We walked a couple of miles down a wash before we found the turnoff for the climb up to the top of the canyon. It was a little steep, but not too bad. We got to the top and it was GORGEOUS! What a great view, all the way down the waterpocket fold. We hiked a couple miles down... and then we realized, we had to do some more climbing, because the trail went up along an ever narrowing ridge. Ok, we can do this.

Within a half mile, we realized that we had bit of as much as we could chew.

﻿
The ridge continued up and down, and became not only more narrow, but more and more steep. The trail, a series of cairns, appeared to have us go directly down an approximately 70 degree slope, and then vault over to an opposite ledge.

There have been few times in my life where, when completing an activity, I thought to myself, "This is stupid."

This was one of those times.

Straddling that ridge, I looked down. I knew we were too far in to go back, but going on felt perilous. Eric was behind me, and I felt like I had to lead us to safety.

But down I went. Looking back, I looked at my top heavy husband, weaving down the cliff-face, and I was more than certain he was going to plummet down the 1500 foot or so precipice. I had to turn away, because I couldn't watch.

This was repeated a number of times over the next several miles. When we finally made it to the end of the ridge and headed down,

It didn't get better.

Once we got to the bottom, we actually got to see the end of Muley Twist Canyon. It was approximately 8 inches wide, and while I really wanted to explore it, I was also pretty sure that I was going to get a foot or an arm stuck and there was NO WAY I had lived through the ridge-o-death in order to die stuck in  a rock.

So we took the "Canyon bypass," which other hikers had recommended that we ran in to.
They didn't mention that the bypass was large expanses of open exposure rock face that involved swinging from one rock to the next. Eric is not a fan of heights and traversed these at a rapid pace. I was more reserved, but upon sitting on a narrow ledge facing the sheer cliff, I thought to myself, "You know, self, I don't actually like this. Forget that whole Everest thing."

After traversing the third level of hell, we finally explored the other end of Muley Twist Canyon.

When we were back down to the wash again, I turned and looked at Eric. "So, want to a go to a bowl game for our anniversary?"

Eric looked at me and went, "Trying to make up for that hike, huh?"

And twelve miles (not the 9 as advertised) and several near death experiences later, the answer was:


PS: It turns out, a backcountry permit was required for this hike. It might have been nice for the park ranger to mention this, and/or issue me one when I asked about the hike. Of course, since he was in a body cast, maybe he wasn't the best person to ask for directions and/or advice.

PPS: Eric already has a hotel room booked near the Rose Bowl, just in case Michigan makes it. 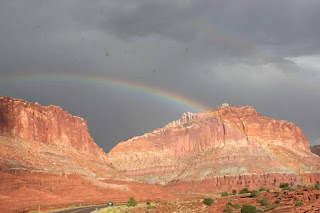 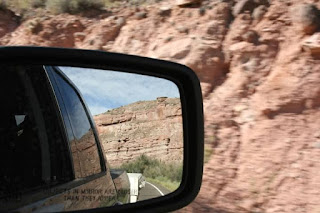