Will Enough Ever Be Enough?

Last year, after the Pulse Nightclub shooting, I wrote to my members of Congress, and published the letter on this blog. Ten days later, I received the email below, from Congressman Doug Lamborn, and a similar one from Senator Corey Gardner (who's reply I no longer have.) 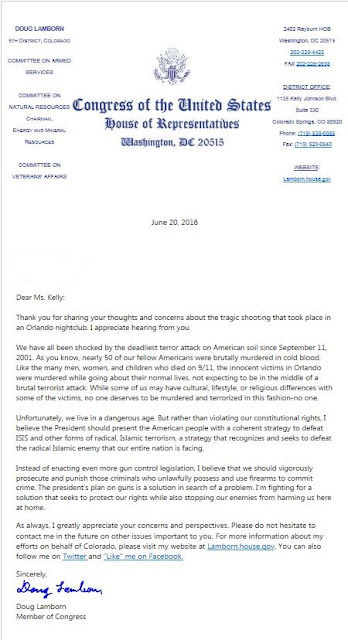 A couple of lines stand out to me here. First, Congressman Lamborn, super-classy of you to point out: "While some of us may have cultural, lifestyle, or religious differences with some of the victims, no one deserves to be murdered and terrorized in this fashion-no one." "Some of us?" Because pointing out that you really don't support the victims' lives is a really good way of modifying "no one deserves to be murdered." Because, you know short of murder, maybe not so much with everything else?
Second, "We live in a dangerous age. But rather than violating our constitutional rights..." I'm sorry, what now? Since when does the 2nd Amendment guarantee unfettered access to weapons, all weapons, all the time? If you remember, what I specifically asked of our representatives to restrict the sales of assault rifles, but clearly, to Congressman Lamborn, that would be a violation of our constitutional rights. If you believe that a restriction on any weapons would be a violation of constitutional rights, why can't I have a nuclear bomb in my house, you know, for protection?
Because I can't.
Because we, as a nation, decided that individuals, can't have a nuclear weapon for personal use. My constitutional right to bear arms is infringed in this instance.
We make these choices all the time. We decide what is best for the country, and when one constitutional right runs right into another and we determine which one supersedes the other. We could make the choice to limit assault rifles, semi-automatic weapons, stockpiling large amounts of ammunition. We could require background checks on ammo. We could close gun show and private sale loopholes on background checks. We could strengthen requirements for reporting perpetrators of domestic violence and related crimes to the federal database of people ineligible for purchasing weapons. We could eliminate the sale of modification parts for guns that turn them fully automatic. We could make those with diagnosed mental illnesses ineligible to purchase guns. We could, for goodness sake, eliminate sales of guns to PEOPLE ON THE NO FLY LIST.
But we lack the political will. There is simply no other explanation. We could choose to do all of these things, but we don't.
Instead, we pray and literally do nothing else.
Except blame mental health. If only we had better mental health care, we wouldn't have these problems.
Except we don't really believe this is true either, because if we did, we would have the best mental health care system in the world. If that was going to solve all our mass murders, we would invest in mental health.
But we don't.
The last law we passed about mental health care was in 2008, where we said that mental health care should have parity with physical health care, but it took until 2013 to actually get around to issuing rules that were implementable. And while we talk about mental health, we haven't done squat to improve the mental health system in America.
Doug Lamborn says that we should "vigorously prosecute and punish those criminals who unlawfully possess and use firearms to commit crime." Apparently, we need to wait until mass murder happens, then punish them really badly, so they don't commit more mass murder.
Gotcha.
For the record, since I wrote this blog post. there have been 13 additional mass shootings. 125 people have died, and 534 have been injured. I'm sure the families of the dead and those recovering from injuries will be glad to know that those punished for mass murder in the past weren't the ones that shot them.
Last week an immigrant drove a truck down a sidewalk and killed six people, and injured 20 more, and immediately, those in power started calling for the elimination of the entire visa program that allowed this man into the country. I'm not saying that we shouldn't be outraged over 6 deaths and want to do something about it, but how do we not have that same outrage and political will to do something about it when 125 people die?
When will enough be enough? How many more have to die before we find the balls to take on the NRA and say, no. To say to the gun manufacturers, "you may not mass produce assault rifles for the public." To say to the politicians, "you have the power to protect people better, do it, or get out."
I first wrote publicly about gun control in 2006. I've been writing to the politicians on gun control since 2004. I clearly keep beating the same drum. I'm waiting for the rest of the band to join me.
When will enough be enough?