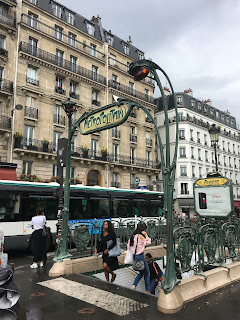 In June, I did a sixteen day trip for work. I took a team to the Netherlands, and then went on to Togo for a week with another team there.

But for a day and a half, I had a layover in Paris.

If you don't know, and I don't know how you couldn't, because I still talk about it all the time, I lived in Strasbourg, France for 6 months in college. I loved that time. I loved living in France, I loved the culture, and I loved travelling around Europe.

And I love Paris. I went a number of times to the City of Lights when I lived in France, and returned once with Eric since. But it had been 12 years since the last time I was there. 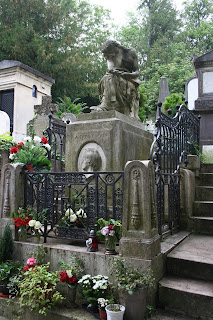 I flew in on an evening flight from Amsterdam, and had to keep myself up until I could finish a work call that started at 1am Paris time (read: not fun. Not at all.) Given that I wasn't in bed until way closer to 3am than I wanted, I was not up early. I was staying right near Charles de Gaulle airport, and since I was up late, I ran from the hotel. It was a really warm day, and most of the run was just along an uninspiring road, but on the way back, I took a detour through a wooded park, which provided better scenery and cooler temperatures. Back and showered, I took the shuttle back to the airport and then the train into the City. Getting to the city was instantly familiar, and as soon as I got to the Metro, it was like 12 years melted away and I never left. I knew my way around and with some additional help from a Paris app for my phone that was available off-line, I was set. I started off a Sacre Coeur, where things weren't too busy. Unlike 12 years ago, and in keeping with the reality of the times, there was much more security around the cathedral, and a bag check later, I was in. 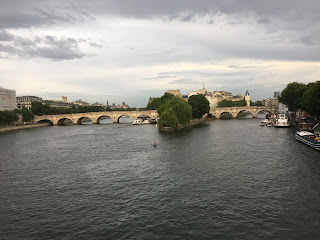 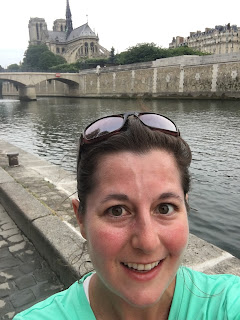 After the cathedral, I walked in the rain through Montmartre, winding through the backstreets and taking in life in Paris. I dropped into another church when the rain got quite heavy, and then headed down to the Moulin Rouge, past the famous windmill, and on to the cemetery Montmartre. The cemetery is jammed between neighborhoods and literally under part of a road. I wandered the classic tombs of the cemetery, then headed across the city to yet another cemetery, the famous Pere Lachaise. I know it sounds morbid to spend so much time in cemeteries, but Paris cemeteries are art in themselves. My favorite tomb in Pere Lachaise is Chopin's, and I went on a mission to find him. I missed my turn, and was stopped by a local who assumed that I was likely looking for Jim Morrison. In French, we conversed about what I was seeking, and he provided directions. I admit, I walked away more excited that I had pulled off a French conversation with a stranger than anything else. I stayed in the cemetery until closing, when I headed out a different gate, and back into the neighborhoods. I stopped in a brasserie for a small Kronenburg, unfortunately remembering that while my host father from my time in France may have worked for the company, the beer wasn't great. Dinner by the Seine overlooking the Louvre, and I was done for the evening,

Then I had one full day in Paris, and I contend, there is no better way to see a city than to run it. And, given that I was training for the marathon, 15 miles around Paris it was. 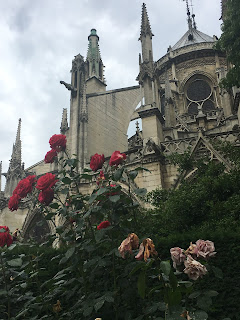 It may have been the best 15 miles in my life. I saw all the sights. I ran the Seine, Ile St. Louis, Ile de la Cite, and Notre Dame during 8am service where the choir was singing AND the bells began to ring. I ran to the Eiffel Tower, around Champs de Mars, and crossed the Pont d'Iena. I ran around the Trocadero, up to the Arc de Triomphe, then down the Champs Elysees to the Louvre, then back over to the Seine and down until I finished mile 15 near Notre Dame. I cooled off by walking the plaza around the cathedral, which is my favorite church in the world. I love the flying buttresses, I love the carvings, I love it. What I didn't love? The amazingly long line and heavy crowds trying to get into the church. It was uncomfortable, and I didn't like it. I ended up ditching the idea of going into the cathedral - something didn't feel right. There were just too many people, too many police, too long of a line.

I took myself to the garden behind the cathedral and then over to the Holocaust memorial at the end of the island. I then went over to the Left Bank, through an open air market, got a crepe, and then headed back to the hotel to clean up. I cleaned up, and headed back to the Left Bank where I spent a rainy afternoon at Shakespeare and Company, then a moule et frites dinner to finish my time in Paris.

Epilogue: Just after I touched down in West Africa, someone attacked a police office outside Notre Dame with a hammer. I'm glad I wasn't there when it happened, and I'm glad I listened to my instincts... but I am so incredibly angry at this incident.