So Much Fun, Let's Do It Again

It's beginning to look like Groundhog Day around here.


When we first moved in to the House in Town, the washing machine broke, in the middle of the spin cycle. We called our agency and the homeowner sent a guy out, who took a look, declared the belt shot, and ordered a part. He came back and installed it.


The day before Easter, as I was packing the kitchen, I smelled smoke. The washing machine, which was cleaning the last loads of laundry before the move, started making a weird noise. I went to look...


And smoke was billowing out of the machine. Clouds. We unplugged it, opened the lid, and it burped an enormous puff of foul-smelling air. Eric insisted that there were no flames, but listen, I have some experience here. Where there's smoke, there's fire, I said. We didn't, as it turned out, burn down, but I ended up finishing the laundry at MaryJane and Chris's during Easter dinner (thanks guys!) The same guy came out, took a look, declared the motor shot, and ordered the part.


Thursday was supposed to be moving day... except we didn't have a place to go. Our agency had a couple leads, but no contracts and so I had to call the movers and push them back to the following Tuesday. We went and saw both houses, and selected one. It was nice. It was new - builder owned, but backing to a highway and therefore difficult to sell. We got the contract, the keys, and on Saturday, convinced our cadets (thanks guys!) to help us load a UHaul with about half our stuff, and bring it over to the new place (House 5 in a year).


We went back Sunday to finish moving everything, and I mean everything - including clothes and food- that wasn't technically furniture.


In between the moves, there was a showing.


The potential buyers threw a fit.


Our stuff was in the house. Therefore, the house wasn't new. They couldn't conceptualize living there, because someone else had been in there (umm, perhaps you should build from a dirt start then, oh and make sure there's a port-o-john outside, because I promise you, ALL of the contractors used the toilets in this house before we got there).


On Sunday, about 10 minutes after we finished moving the last of our stuff and dropped the boys back at the Academy, the listing agent cancelled our contract. We had to get out.


I called my boss and took Monday off. Eric contracted with another UHaul. We were moving to the other house (House 6). We went over to the house, packed up what would fit in our two cars, and had a drink in the kitchen with our friends Steve, Krista, and Micah, who came over because they may have been a little worried about our sanity, given how anxious that we had been in the previous weeks already over moving and not actually having anywhere to move to... 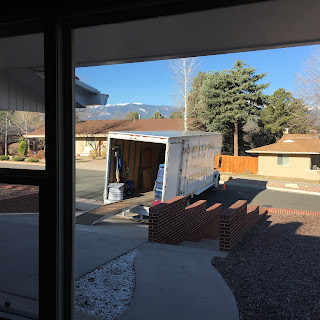 Monday, a work day, was just the two of us... and Steve, who gave up his day off from the fire station to bail us out (thanks Steve!)... because we had to get out on Monday, and fortunately, the next house confirmed for us that we could get in.  I cleaned the house to make sure that we had left no marks, and that no one could complain that I had put our plants on the kitchen counter. Future homeowners, I also cleaned the contractor-used bathroom. YOU ARE WELCOME.


We also had to pick up a bunch more furniture (2 beds, 1 carpet, 1 couch, 1 silk plant) from the agency because the house we were moving into was enormous, and we didn't have enough furniture (Eric says I'm lucky our stuff DIDN'T sell in the garage sale.)

We three amigos moved (again), getting the truck totally unloaded before the scheduled showing arrived around 3:30pm. 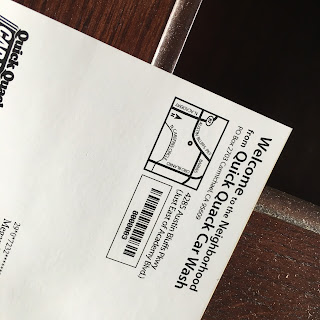 We called the utility company, the internet company, the bank, etc. We got our address changed. Again. Twice over the course of a weekend.

Tuesday, 2 Men and a Truck came. It was the same guys that had moved us out of the House on the Prairie and into the House in Town. From move in day to move out day, 70 days had passed since we last saw these guys.

Eric got the mail while the movers were packing. A "welcome to the neighborhood" free cleaning arrived, and I tucked it into the last box in the house so I wouldn't lose it during the move.

The movers got the furniture moved from the House in Town to House 6. Even though
the buyers are doing a complete gut job on this "mid-century rancher," we still made sure that it was cleaned top to bottom. Our agency checked us out of the house, made keys for the new place, and we were in.

We cleaned floors, bathrooms and the kitchen Tuesday night. Eric put together beds while I unpacked clothes in the closet and got the bathroom set up, so we could function as working adults.

On Wednesday, we went to work. I got in for my early morning meeting and told the team I was meeting with that the last time I worked that hard (two full moves in 48 hours), someone gave me a medal and a Cliff bar (Ragnar relay.)

Wednesday night, we unpacked nearly all the boxes that we planned to unpack, got the kitchen, living room, basement and our bedroom completely set up. We broke down boxes and rolled packing paper neatly, tucking it away in the utility room. We worked until nearly midnight, since our contract says we have 5 days from move-in to get the house in show-ready condition, and we didn't have a minute to waste. We are nothing, NOTHING if not professionals. Property Brothers ain't got nothing on us (ok, except maybe really good hair. I'll give them that.)

At 12:39pm today, less than 48 hours after we finally got all of our stuff reunited into one location, I got a call.

Closing is scheduled for May 11. As long as everything goes to plan, we will be in this house about 30 days.

In the interim, I think I'll get my car washed.

Anyone want to buy a dresser?