Last weekend, we headed back to Michigan to celebrate another Jet wedding.


Now, I've mentioned the Jets before. These are our non-biological family, but we might as well be blood. Our mothers all taught together, and we grew up with each other as "cousins." There is just no one else like our chosen family.


Because we're family, we've all played roles in each other's weddings, and this wedding was no exception... but this time, it was Eric's turn at the wedding wheel. Eric served as groomsmen for John Robert because he was the first person Johnny told about Heather, in my parents' hot tub over Christmas one year... and because I suspect that Eric's been around long enough (we started dating in 1998 after all) that its possible no one remembers now which one of us is "actually family." LOVE it.

We got in late on Thursday night, and spent the night at my parents' house. We spent the morning with my parents, my sister and brother-in-law, and, of course, the cutest smartest baby in all of Texas. We then headed up to East Lansing for the rehearsal. While Eric was getting his wedding instruction, the best man's wife, fellow Jet Rebekah and I played with twin nephews of the groom (and children of bridesmaid/sister-of-the-groom and brother-in-law of the groom/groomen... you know what, I'm going to stop trying to label folks, this is going to get excessive) in the church nursery, then we all headed to dinner. It was a great evening - I mean LOOK at these guys!

Saturday, we were up relatively early. My mom (my parents came in Friday night) and I, along with assorted Jets and a few family members from the bride's side, went over to the Old Marquee, the reception site, and transformed it into a shabby-chic, book-themed wedding. The décor was super cool, and I have to admit, we did a good job (as should be expected. This was not our first Jet wedding rodeo... Jets have decorated every Jet wedding reception since at least ours, and possibly at least some of the previous generations' before us...) In what is becoming a tradition, there was at least one box that was left at the Jet parents' house, necessitating another Jet to break in (this time, Colleen and Matt were tasked with the home invasion), and retrieve said items. The last time this particular Jet family had a wedding, it was the father-of-the-bride's tuxedo pants that were left at home... and one time I had a to retrieve another bride's veil from a hotel room after she arrived at the hair salon sans hair piece. Like I said, we have each other's backs.

The assorted Jets standing up in the wedding (Andrew, Eric, Allan, Amy, Tracie... and of course the bride and groom) got ready a the hotel, and then they were off. I don't have the intel on the bride's side, but on the groom's, I have it on good authority that the Jet men did their absolute best to ensure smooth sailing on that side of the aisle. Also, I happened to be in our room on the third floor when the groomsmen were walking out, and while the photos I took may look a little like I was playing private detective, the groom liked them so that's good.

From there, wedding! John and Heather got MARRIED!!!! Seriously, we have been so lucky as a highly selective, extremely protective family. We haven't had a dud in the married-in bunch and Heather is no exception. Seriously. And once you make the cut, you're in for life. Just ask Eric, Allan, Chuck, Matt, Rebekah, and Reid. Don't mess with them: we will cut you.

After the wedding, reception. In between wedding and reception, I ran over to the venue to put out the last favors (which were in the box that was left behind), make a couple of last minute décor adjustments (because... OCD), and put out some flowers brought over from the wedding. Perfect.

The reception was super fun. Andrew, who was also best man for John Anthony's wedding, is stellar at speeches, and was at once witty, charming and thoughtful. I've stood up in 8 weddings and had minor roles in several others, and heard a lot of speeches. This was one of the best. 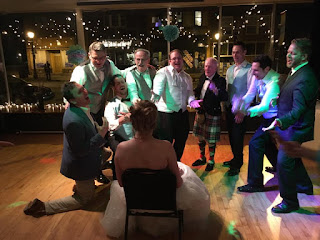 Eric was hot. Really, there's no way around it. H-O-T hot. We should rent him a tux every weekend. Also, he has hair now. Look at it. It is thick and gorgeous and I may  have been bugging him to grow it out for 13 years and he finally has and I hope he never goes back to bald.

We danced, we ate, we posed for photos. I am not kidding you, the Michigan State mascot, Sparty, showed up, but since I'm a wolverine and so are several Jets, we may have been less than thrilled, even if the bride and groom are alumni...

God bless you, John and Heather! Looking forward to doing life with you as  married couple! Also, sorry (SO not sorry) for the below... 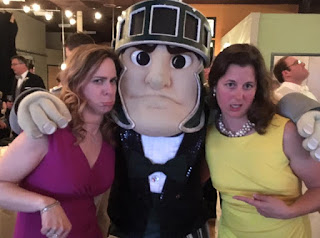