Attack of the Garage Sale Zombies

As you know, we are moving, and I'm over our "stuff." So, we're selling it, and we decided to have a garage sale. So, we did what people do these days: went through the house, rounded up stuff, priced it, and posted notice on Craigslist that we would be having a garage sale.


I wrote the garage sale posting, following what I saw other do and have done in the past. I posted the address, the time, and the date. I listed a description of what we would have, photos, and, based on prior experience, listed what we wouldn't have.

Based on prior experience, I also knew that people tend to show up to garage sales early. We had one last year, and my neighbor Samantha came over to help me set up 1.5 hours early. As soon as she got there, people started knocking. We opened the garage door to start putting things out, and people showed up like the Pied Piper was whistling. They literally started pawing through our boxes of stuff and crawling over things we had yet to set out, just to get to whatever it was we had. So! Thinking that I would note this with humor, I concluded my garage sale notice with: "Also, if you show up early, I will put you to work hauling stuff out and setting it up. I only have two hands, and can only set up so fast."

Apparently, what I forgot to include was: "Oh yea, and don't show up days early either!"

Thursday morning, we got a text from the realtor of the house. "Umm, there's a woman who wants you to call her about furniture you have for sale. I didn't want to give out your number." Eric texted back, "Thanks. Is she connected to the buyer? How did she know?" We had seen the buyers over the weekend when they came to do some measurements of the house, and we had mentioned we were selling furniture. She texted back, what, to me, what just incredible. "She saw your garage sale ad on Craigslist, drove by, and got my number off the sign." Seriously? That's just obnoxious and we apologized.

We stayed the week at our friends' house, Michelle and Bob, dogsitting, so we hadn't been home. Thursday was the day we were due back, except they got held up due to the enormous blizzard that came through, so we packed up the dog, and late morning, Eric came home.


Which is about when the doorbell started ringing.


Through late morning, people showed up at the door. Asking for furniture. Asking to see what we had for sale for the next day's garage sale. Asking to come in.


In retrospect, I briefly thought: "well, why didn't we just sell the stuff to them then?"


The obvious answer was: "because you don't let strangers into your house alone, to walk down into your basement to purchase furniture. That's dangerous."


That thought, however, didn't stop the zombies from showing up. Eric called me and said "you have to do something about this."


I modified the ad.


An hour later, I modified it again.


By 9pm, here's what the ad looked like (if you click on it you can see the full ad in larger font): 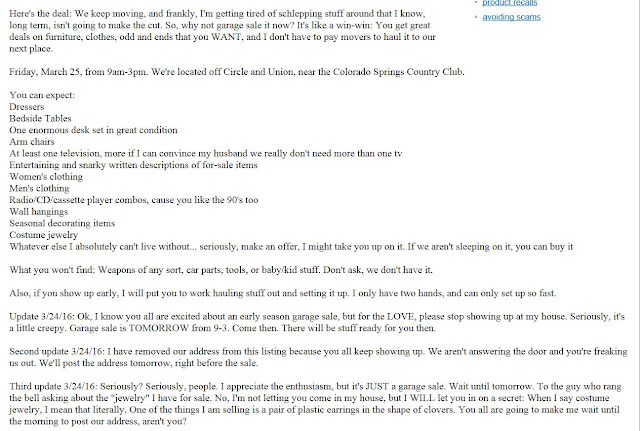 We went to bed, and I won't lie, I didn't sleep well. I kept thinking about people who wanted in, wanting our stuff BEFORE ANYONE ELSE.


We were up early.


Didn't matter that the garage sale started at 9am. The first car drove up and sat outside at 7:30 in the morning. The second joined it at 7:45.

I made coffee. We finished preparing everything we possibly could before we had to open the garage door.

The woman and man who got out of the cars at 8:10am had read my ad. The announced that they were "there to help."

I pointed at the three items that needed to come out of the garage and onto the driveway and told them to start hauling. They laughed, but I noticed that they didn't actually move anything. However, the woman did purchase $12 worth of jewelry.

Our friend Steve, then our friend Patrick and his daughter Hannah, came to hang out. Later, our friend Samantha  (Patrick's wife and Hannah's mommy) came by. The boys drank Blood Marys.


All of the people that showed up the day before came again.


None of the furniture sold.


Are you kidding me?