What Happens When Eric is Away

Most of the time, when Eric's gone, nothing terribly exciting happens. Bathrooms get cleaned, dusting happens, the vacuum comes out, and, if I'm feeling really wild, I may reorganize a closet so that Eric's shirts are in straight, ROYGBIV lines by type (short sleeve, long sleeve, button up, 3/4 zip). I know, wild right?

However, very occassionally, I do other stuff.

Like have the alarm go off at 2:30 in the morning, on purpose.

See, I had an 8am flight this morning, and, in fact, I'm sitting in the Houston airport, waiting for a connection to Charleston, SC, where I will pick up a rental car and drive down to Savannah, GA, to speak at a Youth for Christ conference. (Note: if you are reading this and thinking, 'oh! they aren't home! rob their house!,' we have an alarm that works, police with very little else to do but respond, nothing good to steal, and a neighbor with guns who knows we're gone. Good luck.) But that isn't the reason the alarm went off at 2:30 (and I woke up at 1:24, then went back to sleep.)

﻿﻿
See, there was a thunderstorm yesterday when I got done with work. A really big, torrential-rain type thunderstorm.

I was supposed to climb the Incline after work. I had my stuff in the car, and, despite the rain, even drove down to the turnoff just to see if the storm would pass. It didn't.

The other problem is that the Incline is closing for several months for repairs, starting Sunday.

The third problem is that I had convinced myself that I needed to do the Incline one more time before I fly back to Michigan to do Dances with Dirt. Convinced. CONVINCED.

So, at 2:30 in the morning, with clear skies throughout Colorado, I got dressed, put on my headlamp, grabbed a flashlight and my camelback, and headed out.

Today is also the Ascent. For those of you who aren't familiar, the Ascent is the half marathon UP Pike's Peak, that starts at roughly the same place as where the Incline is. If that isn't enough of a challenge for you, the Pike's Peak Marathon is tomorrow. Up, then down. 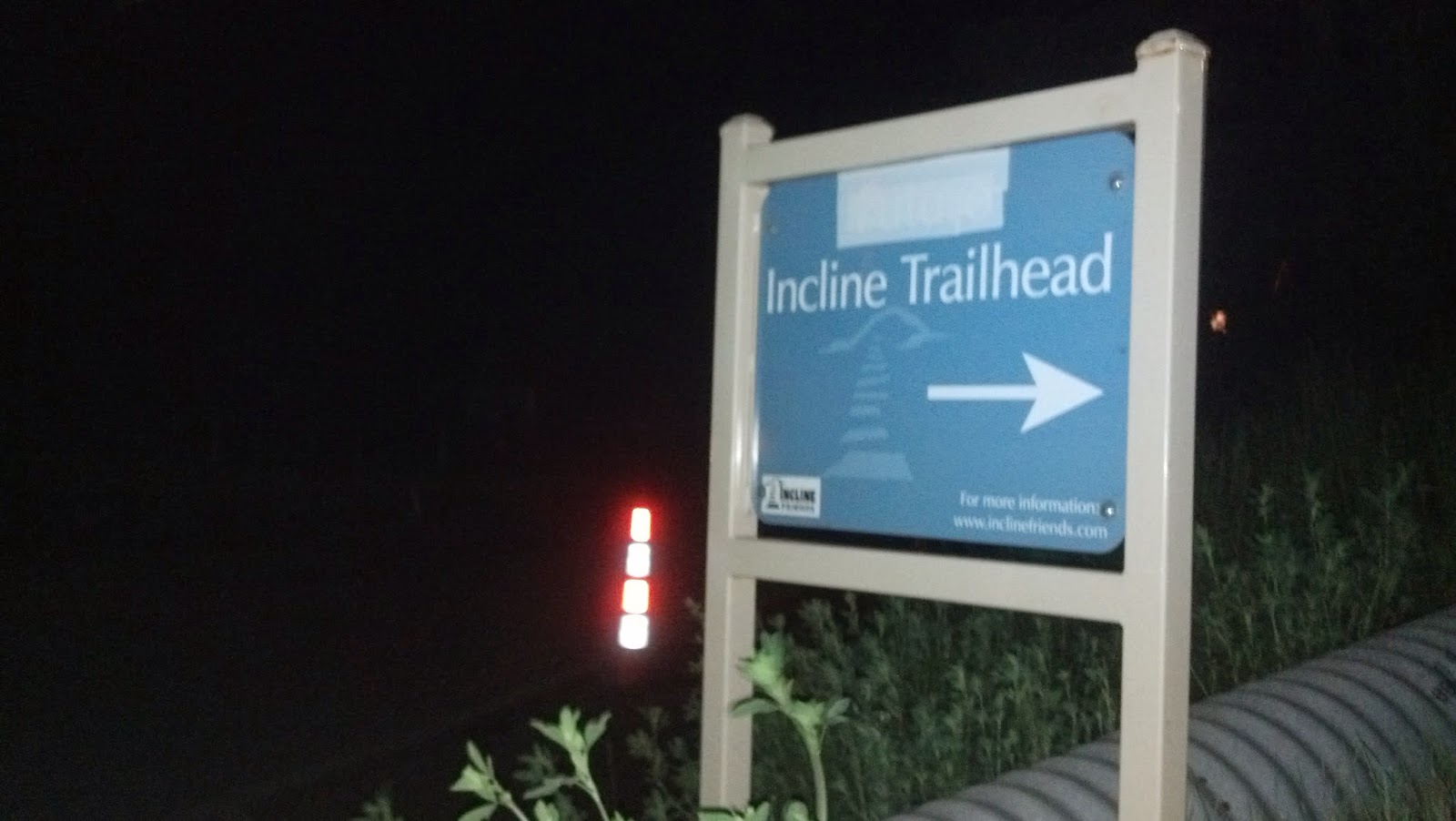 However, the complication for me was that they close the streets in Manitou Springs at 5:30am, meaning I had to be up and down and out of the way before then.

I had already decided that I needed to go down the Incline after I got up it, since I didn't think that rutted out Barr Trail was the best idea to do in the dark. But it meant that I had to hustle.

And hustle I did. However, time was against me, since I had some qualms about where to park this morning given the race, so it took me longer than normal to get to the trailhead, even though there was NO traffic and no one around... Then, I started to get a little paranoid about when I needed to be out of Manitou, because with an 8am flight, I could not afford to get trapped, and the road to the Incline is one-way in, one-way out... So, after 35 minutes, I decided that I needed to bail, and started back down. Totally disappointing, because I was .55 miles in at that point, and on pace for my own Incline PR. But, what can you do? When you gotta go, you gotta go.

So, for those of you questioning the wisdom of going out in the dark... It isn't that uncommon, and a 3:30 start isn't unusual for Barr Trail hikers heading up the Peak. I had my cellphone (and with our current carrier, I have a signal all the way up and down.) Additionally, I figured that even at that ungodly hour, I wouldn't be the only one on the Incline, and I was right. THAT SAME GUY from two weeks ago passed me going down as I was going up, then I passed him going up! Ok, at least I think it was that guy... it's a little hard to tell in the dark. On my way back down, I passed another guy who was glad to see me because it meant he wasn't "the only insane person out here." When I was almost back to the bottom, I passed two more guys, who were climbing in the DARK, no lights. And you question MY decision making!

By the way, going down isn't any easier than going up. You just use different muscles. By  the time I was down, my legs were shaking pretty good from the descent. I can't wait to do it again. At 2:30am or any other time.