No-No, or How We Broke in the New Subi

Well, the holidays are over, and January is apparently #2020's ugly hangover. I was hoping for a fresh start, but yesterday the world burned down again in ways that ushered in new fresh hells, and, well, I need a bit of a distraction as I sort out my feelings while climbing the Incline over and over. 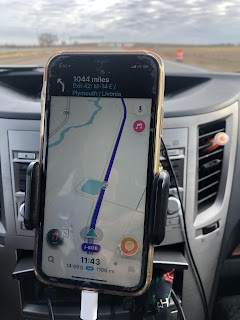 So! Story time, boys and girls!

We have been in discussions, Eric and I, about replacing HailNo. She's been a good car, but she was tripping the light fantastic toward 200,000 miles, and with a storm season coming up to coincide with a sabbatical Eric is planning, that could have meant a continent's worth of additional miles on her this spring. So he started looking, all over the country, for what's next. The smart money means you don't buy a Subaru in Colorado, as its the state car and they go for a premium here. When we got my Forester, we bought her from a dealer in Connecticut, and could have sold her for $5000 more than we bought her for after we crossed the state line.

Eric found what's next in Virginia Beach. He bought her over the phone, and arranged to have her delivered to my parents' house in Michigan. That meant saying goodbye to HailNo. We posted on Facebook that we would be taking her to Michigan, and anyone along the way could purchase her. Our good friends and featured guests on our blog, the Z family, took us up on the offer to better schlep the five kids around.

So we fully quarantined for two weeks (e.g. no groceries, no going out, hiding from the mailman) to make sure we were clean and could protect my parents, then drove straight through in a 20 hour blitz to Michigan, stopping only to get gas and pee in fields. No kidding, but you all know I have this down to a science. At one point I even disinfected our shoes, just to be sure we weren't tracking in the virus. We spent a lovely Thanksgiving with my parents, then headed back home, in two cars for the first 4 hours, and then the new car after that.

Meet No-No, HailNo's successor. She, of course, had to first make a cross-country journey to be worthy of garage space in our home, which she did with ease.

Once we were home however, she needed a proper induction ceremony. 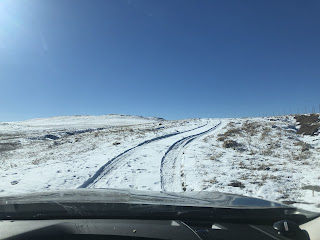 Which is how, the next Saturday, we found ourselves following Google on a dirt road that was supposedly leading us to a patch of pristine trees in the National Forest good for Christmas cutting. We were 1.5 hours into this journey, heading through what appeared to be a pasture with nary a tree in sight when I turned to Eric and quoted from Christmas Vacation, "You didn't bring us all the way out here just so you could buy one of those stupid ties, did you?" 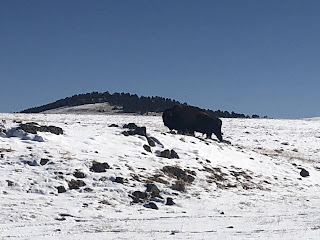 Which is about when the buffalo appeared.

Yep, buffalo. Wild and wooly, there he was, standing next to this supposed "county road" that has suspiciously come rightnext to a broke down barn, silo and then made a hard left turn past a water trough.  He stared at us. We started at him. We kept going. He followed. We sped up.

Another half mile, and we pulled over because what we were driving on looked quite a bit like snowed over pasture land, and not like a road. At that point, Google maps repositioned us... and yep, we were definitely not on a road. We turned around, crept back by the buffalo, and eventually found where we had gotten off course. We followed the "road" again, on in through the barren and tree-less countryside until... 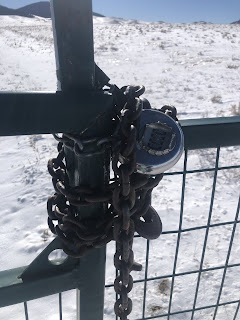 We backtracked 10 or 15 miles over snowy ground and by that buffalo for yet a third time, and eventually made our way out. We finally found some treed National Forest service land, and turned in. Up a snowy embankment, and within 10 minutes, not too different from last year, we located a tree. Slightly smaller, but fuller and heavier than last year, we took 4 feet off the bottom and ended up with a decent looking 11 footer. We dragged the tree downhill to the car, and then Eric deadlifted it onto No-No's roof, as I couldn't manage the lift from chest to straight over my head. Did I mention No-No is taller than HailNo?

As per our usual, we strapped the tree down, and headed for the self-car wash, where I cleaned off the tree and stripped it of dead and dying needles so the house wouldn't be quite so messy. Seriously, National Forest trees are dirty with a capital D.

And then home, where we de-treed the car and began the Christmas preparations. 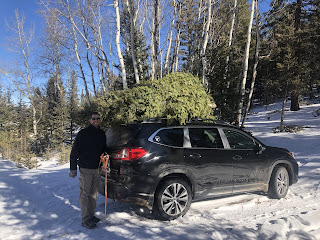 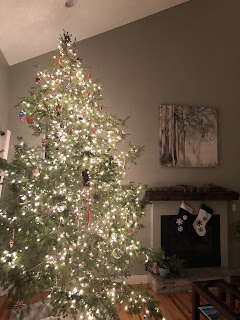