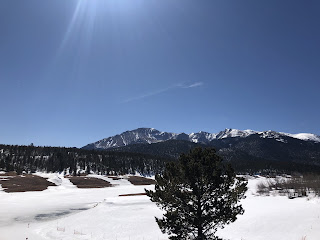 Two years ago, I pulled out of the Pikes Peak Marathon and the NYC Marathon because I was fully broken. Cracked femur, multiple torn muscles, tendinitis in the IT band that ultimately meant 7 months of physical therapy and doctor's who told me I could "walk for 10 minutes" and that was it. It was awful. I got really depressed, I gained weight, I dropped off social media and my blog to get away from it all. I came crawling back last year, and made it across both the start and the finish lines of the NYC Marathon, in all its wonderful glory (even if it didn't feel quite like a comeback in the gastrointestinal sense...)

But my mountain was waiting for me, asking me to return like a siren song.


January first, on the trail that leads to the Peak, I answered that call. I registered for the race, right there on the trail, and started training. Twice a week up the Incline, progressively longer runs.

Then Covid happened, we all got quarantined, and the Incline shut down. I kept going, running in my neighborhood, adding mileage and trying to get up the mountains behind the house. It wasn't quite the same as the base-building from the Incline, but as the weather got nicer, I added Barr Trail to the mix. I felt behind, but as my running friend Amy said, "Everyone's behind." Its true - its Covid. I felt like I wasn't going to break any landspeed records, but I could do this.

But was the race going to go? That was the thing - there was this unknown out there, where the race organizers were saying, "Yea, we'll let you know." Everything else started getting cancelled. Boston, Berlin, The Golden Trail Series, Leadville, every local race imaginable... all gone virtual or outright cancelled.

Then they cancelled the Ascent - with a question mark for the marathon. They gave marathon runners until June 20 to decide if they wanted to run (if it went), defer (guaranteed entry next year, no additional payment needed), or cancel (money back.)

I hemmed and hawed. Ultimately, I wanted the race to just cancel so I didn't have to make the decision myself. I went back and forth: they talked about dropping aid stations - would I be able to carry enough water on my own? I've self-supported up and over, but I refilled my water at the top of the mountain. Am I going to look like a loser if I pull out? How many racers were actually going to show up?

And then the numbers of Covid cases out-of-state started to go up again. If you aren't familiar with the Pikes Peak Marathon, it draws all kinds of out-of-staters. These folks take pride in training at low elevation and grinding up the mountain. Many succeed.

Many also spit, wheeze, cough, puke and stop in the middle of the trail unexpectedly. We all risk falling down and spreading blood around. The trail is narrow, and even more narrow the higher you go, to true single track where you are inches away from the next person to try to pass.

In the end, I couldn't get over the images of getting spit on, or grabbing something someone else touched at an aid station. I couldn't get past the reports of events held that resulted in spiking infection numbers (even today, including a quote by the organizer "I was wrong. It was too soon and I'm sorry.")

Maybe by 2021, people will have figured out that wearing a mask keeps your germs to you, or at least that its the kinder, nicer thing to do for others, and stop being completely self-absorbed jerks who can't fathom being inconvenienced in any way even if it kills someone else.

At least until then, I can still run, even if I don't race.