I think I need some humor today. Maybe you do too. Turns out, I can be, on selective occasion, relatively funny. So let me tell you a story.

I don't know if you remember, but it was possible to get sick with something other than Covid in the days before the pandemic. The first week of January, when coronavirus was just a small issue in one city in China, Eric had a week of new staff orientation up in Denver. He stayed in a hotel and met with people from all over the country. I left on the weekend for my nephew and niece's baptism, and was gone. Eric came home part way through that weekend.

He picked up something from one of the attendees.

By the time I got home on Monday, there was a full-on, raging case of man flu in our house. Coronavirus stood no chance against the deadly illness infecting this full grown human. 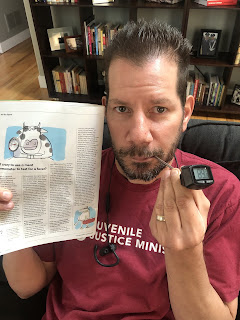 What there was not, by the way, was a fever.

With a meat thermometer.

Apparently, while I was on the other side of the country, he couldn't find either human thermometers we own, so he improvised. I laughed my butt off, confirmed that he did not have a fever with the human thermometer and sent him to bed.

Six months later, the current issue of Consumer Reports is delivered to our house.

There is an entire article on taking your temperature with a meat thermometer.