Bits and Pieces in Quarantine

Two days ago, hummingbirds arrived back in our neck of our woods. I love my tiny little friends, even though I absolutely know they just use me for my sugar water. 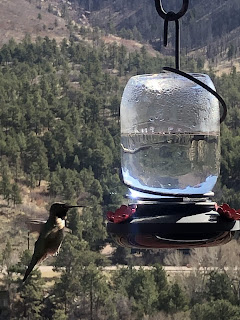 They were around this morning, but later in the day, the wind kicked up like this was Dorothy Gale's house, and for all I know those teensy creatures were blown back to Costa Rica. Seriously, it was like Oz out there.


Speaking of Oz, Eric is looking at a potential chase. He's self-supporting, and has built a bed in the back of his Outback, and trying to figure out where to put a cooler so he has all his own food and drinks. He's planning on getting close to weather, but social distance from other people.

We continue to social distance. We've been going out for a walk nearly every night, and every night its a multi-stage routine. We get out our bandannas, put them over our faces and tie them tight. We grab the bear spray. We put on our shoes. We lock the door behind us. Today though, we both forgot to grab our bandannas, until we were out of the house. We should have gone back in to get them, but we figured it was later than usual, and there likely wouldn't be people out.

Which is how we literally ended up turning tail and running from two older women who appeared out of nowhere on our street.

We skittered away like mice in front of your flashlight when you walk into an abandoned cabin.

We should have worn our bandannas.