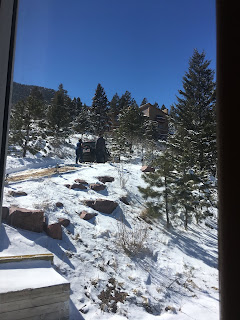 Welcome back to my blog! I know, 2018 wasn't a great blogging year. I traveled to 13 different
countries, broke my butt, worked a million hours, and ended the year with so little energy I couldn't even get out our annual Christmas letter. I also took a significant break from social media, am not sure about getting back on, and changed my name on my account due to some heavy cases I'm working. My butt is fixed, I'm still working a zillion hours, but I get a couple months reprieve on the travel and I've reluctantly agreed to at least post this blog to Facebook, so here goes nothing.

And by "nothing" I mean our postal carrier.

As you know, we've had some adventures here with the postal service. First there was Fred, and all the wonder he brought to the rural route we live on. Then he quit, and for the last year, we've had Fred's replacement, a lady who's name is Tammy or Terry or Teresa... I'm almost never close enough to her to read her partially obscured name badge, so let's just go with Tammy.

Tammy has not exactly been a shining star of a replacement for Fred. Since we bought the locking mailbox, I have had to intervene at least twice because she hasn't quite known how to put the mail in said box, and once was shoving a package at the box with such violence I was relatively certain that whatever in there was not going to be in one piece. I have also talked with her about driving down our driveway to deliver packages, because she once dumped a box of my contact lenses below our mailbox, and they BLEW INTO THE WOODS. At that time, she told me she had to figure out how to do it, to which I showed her how to turn her car around in our driveway... only to learn that it wasn't the driveway that was the problem, it was the direction she would be facing when she got out of our driveway that she didn't know how to overcome.

However, she did eventually, with MUCH grumbling and groaning, start driving down our driveway.

When she bothers to deliver the mail, which is with about the same frequency as Fred used to (read: when she feels like it.)

"When she feels like it" did not include the last two days, or packages the day before that.

Here in Colorado, we had a rather significant blizzard on Wednesday that literally shut down the state, so I totally get why she didn't come out on Wednesday - I personally have not left our house since Tuesday, but then again, I also get to work from home. Thursday the storm had stopped, and the plows had made it out, but no mail. I kind of get it, but the garbage, UPS and FedEx trucks all made it through our neighborhood on Thursday, so... Also, why packages didn't get delivered on Tuesday is anyone's guess- pre-blizzard preparation panic?

Thursday, Eric blew the snow off the driveway. This takes considerable efforts given we live on a hill and the driveway is gravel, but he's rigged up the tank-tread snowblower just so, and the results are pretty good. I shoveled out the porch and the walkway. By today, a good chunk of the snow had melted and the drive was clear, as was the walk.

But not clear enough for Tammy.

Who got herself stuck in our driveway.

I guess I should be grateful that she came down our driveway to deliver our package (that was supposed to be here Tuesday and it's now Friday). However, I was on a call when the doorbell rang and while I was trying to be kind, I have a feeling that I gave her bug eyes when she told me that she couldn't get up our drive, was in four-wheel drive LOW, and had run over our landscaping lights.

Since I was on a call, I ran to the basement and told Eric I needed his help (while the project manager I was on the phone with was cracking up on the line). While I carried on with my call, he went outside to rescue said postal-service-employee in distress.

She told him she was from Texas and "wasn't used to driving out here yet."  (Umm, you've had this job for over a year, and subbed for Fred before that. Surely you had an IDEA of what the roads and conditions were like when you started your employment??)

Eric tried explaining the process of driving uphill to her, but was met with a blank-eyed stare.

He eventually got in the car, and, unsurprisingly, on the first try, drove the four-wheel drive Jeep Cherokee with the wheel on the opposite side of the vehicle formerly driven by Fred and now "owned" by Tammy (did she buy it from Fred? did the post office give it to her?) up the drive and into freedom.

We are never getting our mail again.