So, not too terribly long ago, the parking lot at my work was subject to one of what, in my opinion, may be one of the most interesting visits possible.

I mean, like unicorns, yetis or a selfless politician, I was pretty sure they didn't exit.

And then, there on the ground in the parking lot, was proof they did.

So, if you aren't familiar with this contingent of trolls, the flat earth people are a group of mentally unstable conspiracy theorists that believe that despite all evidence to the contrary, that the Earth is in fact, flat. These mental midgets apparently believe that the earth is some kind of disc floating in space (maybe?) covered by a dome, and that all governments world-wide since Copernicus have been conspiring to keep this a secret. Now, how this remained a unifying agreement during say, World War 1 or 2, I'm not sure, but clearly, even though these governments attempted to annihilate each other, wipe population groups off the planet and/or drop nuclear bombs on each other, THIS was the one thing that they could all universally agree to keep secret. 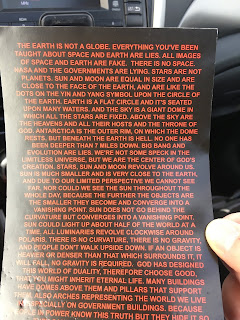 And now, this elite group of geographic aficionados  is bound and determined to break to government's hold on the truth, one anonymous, double-sided, 10 point font,  poorly worded windshield flyer at a time.

This group assets that not only is the earth flat and dome covered, but the sun only has enough power to light half the world at a time, and as it moves from side to side, that's how you get sunrise and sunset. They also throw in some selected Bible verses (singular and out of context) along with gravity denial ("people don't walk upside down") as proof of their claims.

The group also assets that the world is only about 7 miles thick, or the distance I ran last Saturday. So, I guess I can now say I ran the world from top to bottom.

Funnily, they never address how I, in the course of my employment with an international NGO, have at least twice, flew east to my destination then continued flying east until I came home from the WEST side of the country (one route included Denver to Houston to Moscow to Singapore to Jakarta and onward and then eventually to Toyko to Los Angeles to Denver.) Maybe we actually flew in some celestial circle we weren't aware of and airline pilots are in on the conspiracy... but it also occurs to me that maybe littering the parking lot of an organization like mine isn't the most effective way to spread their message.

However, I also assume that these hobbit-esque creatures are also likely the same kind of people who believe that vaccines cause autism and fluoride in the water is a form of government control, so they are most likely to die out from drinking untreated rain water and exposing their offspring to diseases preventable through science. Really, they are a short-term nuisance rather than a long-term concern.

But...seriously? I mean, how sad and tiny is your faith that the fact the earth is round creates a crisis for you so much that you have to resort to Middle-Ages-style superstition and paranoia? I mean, what's next? Witch burning? Crusades? Pouring boiling oil off your roof to repel your enemies?

While you ponder that, I have a plane to catch...