Ok, so here's the news: Fred is leaving his post as neighborhood mailman. His last day will be Jan 31. According to Fred, via text to Eric, he's a contract employee, and the post office told him that he would need to start delivering three times the mail, but didn't offer him a raise. Fred told them what he would need in order to do the job, and they refused, so he quit.

I am seriously wondering if "three times the mail" is just the rest of the mail and the packages he doesn't deliver daily, but what do I know.

However, this is not the point of this blog.

The reason Eric texted Fred was not for a weekly howdy-doody check-in, or to share feelings, but to try to figure out what he had actually delivered to the house that day.

See, we've had a rash of mail thefts in our neighborhood this winter. I came home on Monday to find that our mailbox door was down, and just one lonely piece of junk mail in there.

That didn't seem right, even for Fred.

Plus, we have informed delivery as I've mentioned before, and we were scheduled to get more mail than this.

Given the strange situation, the whole "stuff getting stolen in the neighborhood" thing, and the fact we were supposed to get more, I asked Eric to text Fred and ask him what he dropped off.

Fred had no idea, even just a couple hours after delivery (sigh.)

However, Eric reported that it wasn't uncommon for the informed delivery to be delayed by a day, and we should wait until the next to see if the expected stuff came.

The next day, no dice. 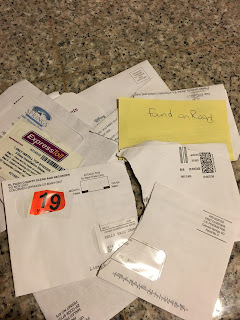 And, it wasn't just any robbing of mail. Most days, we just get random junk: Anita's old catalogs, notices of real estate transactions, coupons. But this day? Of this day, of all days, my parents sent an anniversary card, HailNo's registration was due, and our ExpressToll passes arrived.

The following day, our mail arrived.

With a sticky note: "Found on the road."

Torn in half, all except the anniversary card (which had a check in it). That was totally missing.

I'm going to go Liam Neeson on this guy.


Since I don't shoot people, I've decided that I'm going to find this creep out there some time while I'm running, sprint his car down, spray his face with pepper spray and call 911. I've also considered buying paint balls for that popper we've never used, and hide in a tree. It's the best I've got, but he STOLE THE NICE WORDS MY PARENTS WROTE! And that's just not ok.

Eric had a more practical response. He went out, bought a new mailbox that locks, got cement and a 4x4 post. We now have a new mailbox that is of Fort Knox quality, and the dum-dum that stole our stuff has one less easy opportunity on our street.

I should also note however, that Eric plans to start "patrolling" our neighborhood to catch this guy. I know it won't, but I can't but hope it goes something like this: