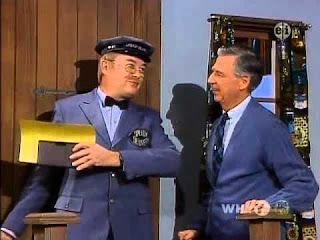 As I write this, our mailman has just received our annual tribute Christmas gift from us.

Out here, it's a little more like Funny Farm.

When we first moved in, we noticed that we would get a lot of "sorry we missed you" slips in the postbox. We would trudge down to our local, tiny post office, and pick up our package. This went on for months, and we couldn't figure out the timing. Eric works from home, and so it was puzzling how we could so frequently miss the mailman. We began to wonder what was going on, and it started to get annoying to have to go to the post office, especially when UPS and FedEx dropped things off at the front door. We even missed a perishable package once, and the fruit in it was rotted by the time we got it, since we missed the package slip until after closing hours on a weekend.

Then one Friday, I was working from home, and, since it was a nice day, I was sitting on the front porch. Fred, our mailman stopped. I looked up the hill to the road, and he smiled and hollered "hello!" I returned the greeting, and as he was pulling away, I went to get my shoes, thinking, "what a nice guy."

Until I found the "sorry we missed you" slip in the mailbox.

Are you kidding!? I was sitting RIGHT THERE!

So, I hopped in my car and took off after Fred. I couldn't find him in the neighborhood, so I went to the post office. I explained my predicament, and asked for help.

"Well, the best thing to do is just talk to Fred. See, we don't have a Post Master, so there really isn't anyone in charge here that can do something about that. We had one, but he left. Then we had an interim one, but she just left to go take a post at the Academy. We might be gettin' another at some point, but I'm not sure..."

On my way out of the post office, who should pull in, but Fred! Everyone of course knows Fred by his green jeep (it's a rural route, so he drives his own car, and he's the only postman for our area, except for the few times when his wife does his route for him... not kidding, and I don't think she's an actual postal employee).

So, I go up to Fred, and in my friendliest, most neighbor-y voice, explain who I am, and ask him "how do we solve this? I can't come to the post office all the time!"

To which Fred responds that he can't come down our driveway, "you know, for safety reasons."

Apparently the postal service has modified their motto to "Neither snow nor rain nor heat nor gloom of night stays these couriers from the swift completion of their appointed rounds, you know, except for a gravel driveway on a hill. That's a deal breaker."

But what am I going to say? "I insist you get down my driveway?" I mean, I know the post code - postal carriers are supposed to deliver to your door unless your driveway is more than a quarter mile long (which is why the House in the Woods had a mailbox at the road and not on the house). But Fred's the only mailman in the community, and if I make him mad, we may never get our mail. Plus, if he slips and falls, the "I told you so" would likely be in the form of a civil suit.

So, I asked, "what can we do?" After a pause, like he's thinking really hard about this, Fred suggests that if I give him our phone numbers, he will call us when we have a package and he'll leave it next to the mailbox for us.

Ok, fine. I write down our numbers, tell him Eric works from home, and we go on about our way.

And since then, Eric and Fred have been texting each other. It's not a perfect system, and sometimes our packages get rained or snowed on, and they are always in the grass, but it's better than nothing.

Fred also isn't exactly the most consistent in the regular mail delivery either. We noticed that he won't get out of the car to deliver the mail, so if there is a car parked anywhere in the vicinity of the mailbox (not just in front of the mailbox), we won't get our mail that day. Other days, we just don't get the mail. We used to think that we just didn't get mail that day, but then Eric signed up for "informed delivery" a new service from the post office where they send you a photo of the mail that you are supposed to get that day... and some days, it doesn't arrive.

There was another time when we were on vacation, and a package was supposed to be delivered. Eric texted Fred when we were back in town about it, and said that he would go by the post office to get it. Fred responded that the package wasn't there... I think he left it in the back of his car.

All this has led me to a mental picture of Fred as a slightly overweight, potentially disabled person. I can't really remember what he looked like when I met him at the post office, but in my mind, he walked with a cane...

Until I went running two weeks ago, and saw Fred at a common mailbox (you know the kind where multiple homes have their box all in one place) down the street. He was OUT of his car, amazingly enough, and .... 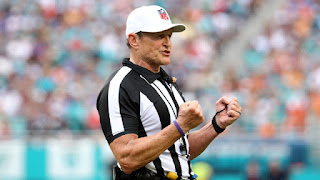 I'm not kidding! The man looked like Ed Hochuli, in a tight polo shirt and Kangol cap.

This totally messed up my perception of Fred, and I have less of an understanding of his delivery tactics now than I ever have.

But, we have to get the mail.

So, we keep Fred happy. Last year, he got chocolate covered pretzels and a Starbucks card. This year, he got a plate of cookies and a gift certificate to a local coffee shop. Let's hope that's enough for us to receive our mail in 2018. 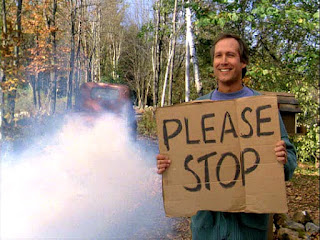