What if #MeToo Isn't Enough? 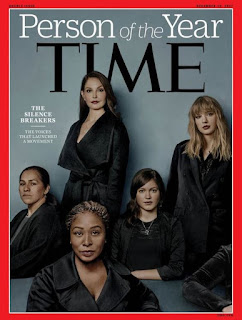 This morning, Time named the #MeToo movement as it's Person of the Year, as "The Silence Breakers." For some, this seems a little strange as the idea of "person," taken literally, is singular, and this is a movement, which is necessarily plural. It's important to remember that Time does this fairly regularly - "The Protester," "The Whistleblower," "The Good Samaritans" and "The American Solider" have all been past persons of the year. The #MeToo movement seems a stark contrast and perhaps stands in purposeful opposition to last year's Person of the Year, the man holding the highest elected office in the US, who has been accused of sexual assault and harassment by at least 12 women.

Yet, I can already see the tide starting to ebb. Make no mistake, outing of harassers and abusers is having a moment, but this has happened before. Higher profile perpetrators, especially those in media and entertainment, have been fired more than ever before, but we've seen this before too. Lest we forget, movie director Roman Polanski was convicted of raping a 13 year old girl in 1978, then skipped out of the country prior to sentencing. Yet he continuously made movies after that, and has won awards for those movies, including three Oscars for the movie that he directed the year after he skipped jail (Tess, 1979) and Academy Award for Best Director (The Pianist) in 2002. He served exactly NO penance, had absolutely NO change of heart, and yet Walter Mathieu, Harrison Ford, Adrian Brody, Jodi Foster, Ewan McGregor, Kate Winslet and many others have chosen to support his work by starring in his movies.

The men, and they are men, in power, are letting the media cycle run it's course, but have no appetite for real change... and they are willing to sacrifice larger and larger chess pieces to keep the status quo. How do I know? Well, beside the fact that women have, in fact, been speaking out for years and jack has changed, let's look at what's still going on right now:

No one has forced Al Franken to resign when photos of him touching a woman inappropriately surfaced. 88-year-old John Conyers was allowed to "retire" instead of "resign" when staffers came forward alleging sexual assault. The President's attorney says he's immune from prosecution of sexual assault and harassment.

Netflix may have fired Kevin Spacey from House of Cards, but their "family friendly" show Fuller House has an episode where DJ is kissed by her former boyfriend without permission, says "no," then he kisses her again, and the script has her then saying "I liked it," and runs a plot where she's confused about who to date - the man she gives permission to for kissing, or the one who kisses her anyway. We've just told future generations of men and women that women actually like to be kissed without permission, and that men should kiss them so that women realize they are attracted to the man. We could have had that entire plot of the story run without the kissing, with a fantastic mature conversation between the adults about attraction and feelings and whatnot, but we continue to drag out the same, tired trope every time.

Speaking of Kevin Spacey, I hear he's hiding out in "treatment," whatever that means. What I fear it means is that he goes to "treatment" to "find himself and understand his behaviors," (or just hide out until it all blows over) but he's never actually held accountable for his actions. To be crystal clear, it is his choice in actions that have harmed any number of men in his employ or under his influence. Choosing to harm someone else is not a "treatment" issue; you may need to learn to make better choices and keep your hands (and body) to yourself, but you still should receive consequences.

Worst (so far,) we have Roy Moore, who has been accused of sexual harassment and assault against teenage girls, running for Congress, and having the audacity to tell people it's his "faith" that's being challenged by, I don't know, atheist liberals or something. No, Judge Moore. I don't agree with your politics either, but it's the child predatory behavior that I have a real problem with, and think that makes you unfit to serve in Congress. I mean, you were BANNED FROM A MALL for your sexually inappropriate behavior, and that's just the tip of your own iceberg. Just when my personal opinion of the President's character couldn't get any lower, yesterday he officially endorsed Roy Moore for Congress, and then the Republican party, who previously had distanced themselves from this candidate and called for him to step down, DID TOO.

Those in power are letting these things continue for their own gain.

The fact that a sexual perpetrator is running for Congress and leading in the polls has me so distressed that this week, I attempted to engage in my first act of political subterfuge. I went online and ordered Roy Moore rally tickets (which were freely available) in a deliberate attempt to take up seats at his rally to prevent others from hearing his schlock. Yep, I did it, and I'm not sorry. Apparently, I wasn't the only one, as the rally eventually changed to "you do not need tickets for this event!"

We need to speak truth back to power. Tell those in charge that we are DONE with this crap. That we will not tolerate those who condone this kind of behavior.

Write your politicians. Tell your pastors that you will LEAVE YOUR CHURCH if they continue to support political candidates who support issues they are interested in but are willing to overlook abhorrent personal behavior. That, my friends, isn't the lesser of two evils, it's a deal with the devil. March in a rally. Speak up when your co-workers says something inappropriate. Tell your children when you see harassment on TV and in the movies. Tweet the networks and the studios. Support and believe your friends when they say something bad happened. Share stories until ears bleed and people are so very tired of hearing them. Then keep sharing.

Don't let this this fade into black during the next news cycle. Push back against the tide. Otherwise, two years from now, we'll have more Roman Polanski's, Bill Clinton's (yep, he should have resigned. I wish I understood at 18 years old what I understand now... a 22 year-old intern has a significant power differential to the president, and can't truly consent to sex. We did a lot of victim-blaming back then and we were wrong.), Dustin Hoffman's, Harvey Weinstein's, Matt Lauer's... need me to continue?... running around, except the people calling out their behavior will be calling again to deaf ears. And the hell will just continue.