I was up at 5:15am this morning, dragging my rear end downstairs to bash on the treadmill for a while. The sun isn't making it's presence known until nearly 7am in my neighborhood at the moment, and I had a 7am call. I've been running from work lately (since sunset is 4:50pm right now) to get a partially lit run in, but today we are meeting up with folks after work, and I've got plans at lunch already. So the dreaded treadmill it was.

Lately, as much as I would prefer to run outside, the treadmill hasn't been too bad. The exactly even pace zones me out, and as long as I have a good audiobook, I don't constantly stare at the time and the distance. This morning though, I was paying less attention to Tiny, Beautiful Things by Cheryl Strayed, and more attention to memories of races-past.

Specifically, my second running of that fall classic, "Run with the Burros," retold below.

As you all know, we have a bit of thing with donkeys. I come by it more or less accidentally, but Eric is cultivating his ass-attention rather nicely by taking the occasional trip out to Cripple Creek to feed his friends. However, accident or no, who can pass up a donkey run that is literally 5 minutes from your house?

So my friend Amy and I planned to make the trek. Her husband Garret and Eric held down tables for us at Manitou Brewing, the host location for the run, while we stepped out in style with about 200 other runners and 20 or so of our best, four-legged friends.

Last year's race was pretty sedate, but this year, we were either in a different spot in the running lineup, or the organizers brought more donkeys, because we were in the thick of it for a good chunk of the run. We started out from downtown Happy Hippie-ville, and headed through a twisty neighborhood for the trail. The problem was that no one at the front of the pack really knew where the run was supposed to go, so we got rather turned around and had to back track several times. This involved turning the donkeys, who had varying levels of compliance and interest. Additionally, said donkeys also had varying and rather uneven strides and paces, which in several instances resulted in a wet snout directly behind my or Amy's ear as the donkey decided to go for a surge without notifying any of the surrounding runners, and causing us to jump out of the way like Esther Williams starting a pool-routine.

We finally made it to the trail and were on easy running pace, chatting with other runners and each other, when the line slammed to a halt. The donkeys just ahead decided that the tiny wooden bridge crossing the dry creek bed was definitely dangerous, and they were NOT going to cross it at all costs. The crowd cajoled and urged, but those burros would not budge. Finally, a professional handler made it to the front of the line and more or less forced them over the impediment. 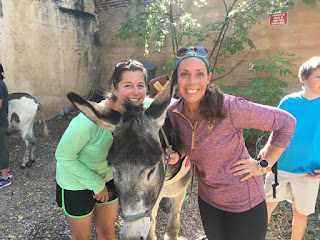 On we went, through the delightful single track that I never remember exists, and therefore never run except for during this race. Down through the cemetery, and across the road to follow the river path and several more burros back into town, finishing at the brewery. It was a warm, sunny day, perfect for a cool down with a local brew and a chance to visit with our running buddies.

Looking forward to next year! Eric's been talking about wanting to do a 5K, and I think this just might be the race for him!