Race Report: Run with the Burros 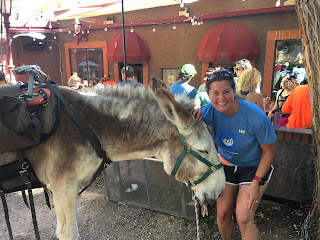 This fall, I had another run-in with donkeys. Not exactly of the same dramatic nature of donkey-runs past, but it was still fun and worth a mention!

My new running buddy, Amy, and I, along with her consistent running buddy (also named Megan) and all our husbands, met up in Happy Hippyville in October for the Manitou Brewing Company's Run with the Burros. It was a gorgeous fall day - warm, with portents of good running! We signed in and walked down to the library lawn, where low and behold, SCRATCH'S OWNER (our beloved trophy winner from last year) was there with a... flock? gaggle? herd? of donkeys, although Scratch was not one. We caught up with him for a bit, then it was time to run.

The donkeys were spread out through the field of a couple hundred runners, and going through the neighborhood adjacent to the library, we passed a couple, of whom Amy fell immediately in love with. We are quite alike in some ways - both runners, both vegetarians, both with odd affections for barnyard animals...

We ran through paved neighborhoods in a generally uphill direction, making me question the racing signage that said "run the trails" and causing me to wear trail shoes instead of street runners... but eventually we did cut on to dirt trail, single track, for some beautiful trail running. It was a bit crowded on the single track, but definitely worth going back and exploring some other time without 200 running buddies at your side.

At some point in the mêlée, I lost Amy and the rest of our group, and didn't end up seeing another  donkey until the end of the race, but it was a nice run. Pretty warm, but eventually we careened back downhill, where the trail dumped out onto street that cut through the local cemetery, then another neighborhood, before crossing the main road and following the river back along the route of the Garden of the Gods 10-Miler, before finally cutting in and ending at the brewery. I won't lie, my feet were tired and had I to do it again, I would have worn my street Nike's and not my trail runners. But all in all, a fun run. Amy and I and the rest of our group were eventually reunited, we hung out and laughed and talked and generally had a great afternoon.

Plus there were donkeys at the end. You could pet them and hug them and everything.

And hugging a donkey is never a bad prospect. 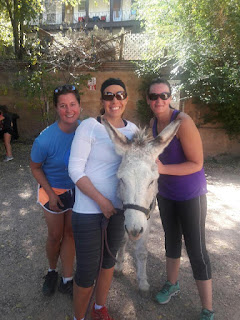