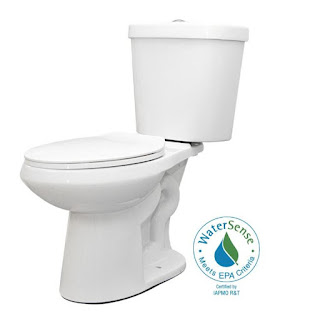 Over Christmas, Eric bought us a new toilet. Actually, he bought us two toilets.

And because I apparently am both old, and have no life, I am so excited about this thing!

Ok, here's the deal. When we moved in to this house, we moved in with Bruno's original toilets. They didn't work well. We tried switching out the guts of the toilet for new guts, with mediocre results. Now, when I saw "mediocre results," I mean that the toilets continued to back up on random occasions, with, or without large cargos they were carrying. Just cause.

That gets annoying after a while, not to mention that keeping plungers next to all the toilets is not exactly the bathroom aesthetic we're going for.

So, Eric bought two new toilets to replace the two most-used toilets in the house. He removed the toilet in our master bathroom and switched it out with one of the new ones. The other one is still in its box, siting in the garage, waiting for installation while I'm in Guatemala next week and Eric guts the half bath (because we do these things), and since he's tearing out that god-awful southwestern tile anyway, why not replace the toilet?

I never thought I could love a toilet, but I might, just a little bit.

First of all, it's ours. NO ONE else has ever sat on it. In the last 18 months, I have scrubbed approximately 7,000 toilets that have been owned by other people, used by everyone and the sister-in-law-that-they-brought-with-them-to-see-the house (and ran me out of toilet paper in the process), were blue, green, beige, pink, black, grey, or white, and were DEFINITELY not new. Installing a factory-direct model meant that I didn't have to clean it first. And not having to clean a toilet calls for a happy dance.

Second, the toilet WORKS. Consistently! We don't have to worry about how fiber intake is going to impact operations!

Third, not only does it WORK, but Eric let me get a dual flush model! You know, less water for light loads, more for... well, you get it. This is good for minimizing water consumption, and that can't be bad for our septic system. And, as you all know by now, I'm a little sensitive about septic systems...