Fall on the East Coast

So, we have a new president. That's all I'm going to mention about that, but note that I've been off social media for the most part for the week and am having some trouble going back to it... so I apologize for missing whatever I've missed, and in turn, don't hold it against you for missing our stuff.

As I mentioned, at the end of October we took a trip to the East Coast. We spent the bulk of our time in New York City, but did drive down to Richmond, Virginia for a weekend. We got to LGA in the evening, and just went to a hotel near the airport, ordered authentic New York style pizza (so good, so much garlic), and made it an early night. Sunday morning was a beautiful day, and we took a ride into the city fairly early, with light traffic. We met up with our former neighbors from Monument, Patrick, Samantha, and Hannah, who now live and work at West Point and were kind enough to drive into the City to meet up with us. We had lunch, and walked Times Square, Rockefeller Center, 5th Avenue, including by the Trump building, pre-election, and were surprised to see the NYPD in tactical gear and semi-automatic weapons... but maybe we shouldn't have been. We spent the bulk of our time in Central Park. I had never been to the park before, and we entered from the South-east side, off 5th. It was fun just to go to such an iconic location. We headed for the little zoo inside the park, as we figured this would be amenable for 10-month-old Hannah. It's not the biggest zoo with the most animals, but for a little one, it's not overly intimidating or exhausting, and was chill enough on a Sunday afternoon that the four of us could entertain Hannah while catching up ourselves. What's super nice is that Patrick and Samantha are those kinds of friends that you can just pick-up-where-you-left-off, and it all works. We had a super fun time, and we definitely want to get out to see them again - next time up in West Point.

Eric started working early Monday morning, and I was left to my own devices for much of the week. Eric's conference was interesting, but not specifically my field, and I was taking vacation days... so I mostly did my own thing, which, as I mentioned before, involved seeing most of Manhattan in track gear and drinking a lot of coffee. The weather was absolutely beautiful for most of the week though, which made running just fantastic. Monday I returned to Central Park, following any route I felt like. 11.5 miles later, I was back at the hotel, got cleaned up, and went out for the rest of the afternoon. I had lunch in Bryant Park, walked down to the Empire State Building, and then back up to spend time in the New York Public Library Main Branch. I met up with Eric after his conference, and we had an early night.

Tuesday, I ran the HighLine, a relatively new park built off an old train trestle. I then walked down for lunch with John and a wonderful time of catching up. After lunch I returned to the Highline, which was much more crowded by this time, and headed to the Javitz Center to spend the afternoon with Eric and his co-workers present their workshop. They were awesome, Eric especially so, and I was pleased to see that many of the workshop attendees resonated with the material and came up after to talk to him. The highlight of the day though was an evening out to a Broadway show! We went to "Something Rotten," which is ending its run in January. I hope it tours because I would totally see it again! 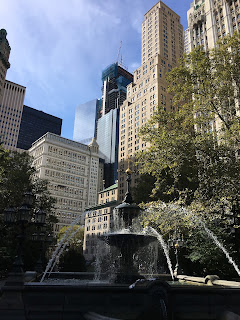 Wednesday I was up early, running the Highline again, and then running the waterfront to Battery Park at the end of Manhatthan. I ran around the park a bit, then headed into the skyscrapers to see what I could find. I got myself thoroughly turned around and saw what I wanted to see in topsy-turvy order, but managed to go to Trinity Church (where Alexander Hamilton is buried), the 9/11 Memorial (assume the emotions), St. Paul's Church, Wall Street (good coffee from a food truck), the Stock Exchange, the Charging Bull, City Hall, the Federal Court, the Brooklyn Bridge (where I debated running over and back, but didn't), then started running again to Tribeca, where I stopped for more coffee at the Roxy Hotel's Jack's Stir Brew, then ran up through SoHo, and with a few more twists and turns and a stop for Bolivian saltena's from a stand, eventually got back to the hotel about 22 miles later, where a nap was in order. That evening, Eric and I walked down to the West Village, where we met up with John again for dinner, caught up more, and ate good Czech food. 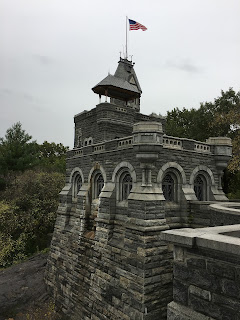 Thursday was rainy and the last day of the conference, which meant our last day in NYC. There were still things on my list, so off I went again, returning to Central Park for another 6 miles through the center of the park including the Shakespeare Gardens, Belvedere Castle and the fountain. After changing at the hotel, I headed out and took a meandering walking tour that ended up including Grand Central Station and more good coffee (Café Grumpy). I then walked over the Javitz and caught the last main session of the conference, and, after all was wrapped, went with Eric's co-workers for a late lunch. Eventually, Eric had to return to the conference, and I met up with an old college friend, Matt, for dinner in the East Village. It ended up being quite the late night as we caught up on 15 years and the news of the day. Eric texted that his team was still at dinner, and I took the subway back up (my one concession this week to walking/running everywhere) to meet up with them. It was after midnight by the time we were back to the hotel.

Friday we took the entire day (unintentionally, the eastern seaboard has terrible traffic on Fridays), to drive from NYC to Richmond, Virginia to spend the weekend with our friends Megan and Brian. While the trip took all day and most of the night, it was totally worth catching up with some of our best friends and getting to spend the weekend reconnecting. We trucked their toddler to two separate birthday parties (coincidentally, at the same place - a room filled with bounce houses. Yes, Mr. Eric did help Quinn learn to play in the bouncy house), and got to get to know their 10-month old, whom we hadn't met yet. The kids are great, and we wished we lived in the same place! It would be great to hang with the kids and have Megan and Brian a regular part of our life again (I mean, there WERE weeks in Fort Wayne where Megan and I spent more time with each other than we did with Eric or Brian!)

Sunday, it was back to home for me, while Eric got to stay on and attend the super-fun neighborhood parade for Halloween. I'm jealous because kids in costumes are the best.

And that was the trip. Let's do it again!!! This time, let's actually take photos with the people we saw...