Beyond the Headlines: Babies and TV

Hello from the cheapest of the cheap seats! Yes, I, Megan Kelly, child-free woman in her late 30's, am about to talk about babies and toddlers on my blog that is most certainly not about child-rearing.

First, let me clarify that I love your children. I don't have to have kids to love them or care about them. I love being an aunt. Second, I have no desire to give ANYONE parenting advice. Oh no, uh-huh, won't try doing that EVER. You have plenty of nasty Facebook-judgers who will gladly give you all kinds of unsolicited advice, criticize your choices, and basically make you feel like crap. I get it, you can't win for trying, and I'm not ABOUT to pile on here... although I might ask why you are friends with those people? They are awful! Oh, and the one-up-manship? I'm not going to get in a fight with your friend over Facebook, but don't think I don't say "seriously, shut up" to my computer when I read comments like "well, wait until you (insert worse thing they have experienced to invalidate your frustrations)" on your post.

So, unless you are beating or neglecting your children (and then, as a social worker and person of conscious, I am obligated to do something), you go ahead and do you.

OK, with that caveat, I read the news today about something that I have taught and advocated on for about a decade: screen-time and very young children. Today, the American Academy of Pediatrics changed it position on screen-time and children. The headline reads "American Academy of Pediatrics Reverses Its Position..." Unfortunately, that headline is a little deceiving, and I'm concerned that people will read it and think that's the end of the story.

It isn't. Stay with me here, because there is some backstory, and much more nuance here than a headline would suggest!

For a long time, the American Academy of Pediatrics recommended NO screen time (television, movies, computer time, cell phone, etc.) for children under age 2. The rationale was this: in the first three years of life - the first year ESPECIALLY - the brain undergoes a massive construction effort. Experience "wires" neural connections in the brain, and the risk is that screen time would "wire" children versus wiring by real-life experiences. This is still true - brain science hasn't changed. It is also still true that so-called educational videos for infants - a la Baby Einstein - don't actually make kids smarter. In fact, the Disney corporation, who owns Baby Einstein, was sued (and they lost) over their marketing campaign that these videos were tools that stimulated babies' learning. The research showed that the only thing kids learned was that they wanted to watch more videos (setting up life-long video consumers for the Disney Corporation, perhaps!!) Other research shows that babies don't experience language acquisition from videos or television - they need real-life experiences, and babies who were exposed to lots of screen time actually had a smaller vocabulary than babies who were primarily talked to by caregivers and not a screen. There is also evidence that large amounts of screen time wires the brain to not have to sustain attention, because images on a screen are constantly changing, giving rise to what adult experience as AD/HD symptoms in children. Their brains are literally being programmed to not pay attention, ugh.

None of this has changed (thank goodness, because I still have all of this info memorized from teaching it to parents and social service professionals for years!) However, what the AAP is now saying is that there is likely no harm in using "interactive" types of applications - Facetime, Skype, etc. so that someone like me can talk to her niece and nephew in Texas. Additionally, the AAP has said that its ok for these little ones to view age-appropriate videos and the like on a screen WHEN WATCHING WITH AN ADULT. They continue to say that it isn't beneficial for babies to engage in "solo media use."

For toddlers - kids ages 2-5, AAP is ok with about an hour of screen time a day. They recognize that kids in this age range are more likely to apply what they see on a screen in the real world. This shouldn't really be a surprise. I'm sure that I'm not the only kid who watched Sesame Street growing up, and my dad tells me that he would come home from work to hear me counting away in another language (Spanish, or French, since living in Detroit we had access to both the US and Canadian Sesame Street iterations). AAP remains pretty clear though that not all screen time is equal. There are still a number of junk apps and videos out there masquerading as "educational material" for your kids.

So what does this mean? Well, we have to be adults who are smarter than the screens. For aunties like me, it means being careful about what gifts I give to my munchkins - do my homework, and don't just buy the newest movie that comes out because it has a cartoon on it for Tess's second birthday. For parents, well, knowledge is power. You have to make your own decisions about what is best for your kids, and hopefully this gives you a little more information, so you can evaluate if it's really the best idea to have your babysitter or day care plunk your kids down in front of the TV for hours at a time. Will a bit of screen kill your kids? Heck no. Is your sanity important if you have had a really hard day, so you put on a video for your kids to watch so you can have 20 minutes of quiet? Absolutely. Kids do better with sane parents, in case you were wondering.

In the end, the purpose of today's post is to clear up the headlines on something I've worked on for years, not to tell you how to raise your kids or what to expose/not expose them to.

You do you. I'll be here to shake your kids up and send them home with squishy hugs and silliness when needed.

Also, selfies totally DO NOT count as screen time, so here's a selfie of our goddaughter L and I from a couple weeks ago when we were all camping together. I don't have a selfie with E because he giggles too much and thinks its too funny too squirm away when you're trying to take a photo. Love those kids! 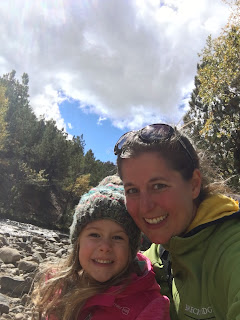 Read the actual AAP Stuff here: http://pediatrics.aappublications.org/content/early/2016/10/19/peds.2016-2591
Oh, and here's a link to NPR, whose article's headline isn't the worst and their content does a pretty good job 'splainin: http://www.npr.org/sections/ed/2016/10/21/498550475/american-academy-of-pediatrics-lifts-no-screens-under-2-rule
Interested in nerding out on brain science like I do? One of my favorite authors, Dr. David Walsh, has several books out that talk about brain development in an accessible way. I used to teach his stuff all the time, as anyone familiar with my work at Great Kids make Great Communities will tell you. His website is www.drdavewalsh.com if you are interested.
﻿