Ok, so frankly, I can't deal with tonight's debate, or the amazing amount of yelling I did in the garage while listening... so, here's the project we finished this weekend.

As I mentioned before, we have been working on creating an accent wall for our master bedroom. I really wanted a cool, rustic-looking wall, but on investigation, buying reclaimed barn wood was stupid expensive. So, with further investigation (read: a lot of home improvement blogs by women who have it way more together than I do), we decided that we could create the wall for free, using wood reclaimed from pallets.

We started collecting pallets, which turned out were everywhere. I grabbed at least two from outside the Kohl's dumpster, one from a local brewery, several pieces of wood from the back of a motel, and one from the side of the road. However, the biggest stash came from Eric taking a trip to Harbor Freight and asking the manager what he did with the stack of pallets from behind the building. Nothing, the manager replied, help yourself.

The result of all this scavenging was pallets of various sizes and provenances. Once we had them all collected, we leveraged the willingness of one of our cadets to help out around the house, and put him to work with a jig saw, cutting the pallets apart through the nails. Then, since some of the pallets were newer, we left the pile to age in the summer sun. 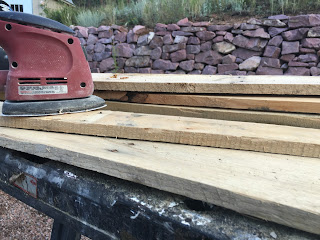 In preparation for the next steps, we then took all the boards, sanded them (because splinters in your head is just not what we had in mind), then scrubbed them, since they had after all, been sitting outside, near dumpsters, etc. We let them dry in the garage up on saw horses to keep them clean. We then sorted them and for the ones that were still too "new" looking, we added some pizzazz. On advice from the lady at the hardware store, we took metal shavings and soaked them in apple cider vinegar. This created a concoction that was suitable to aging wood. We did that to some boards, and then took the leftover cans of Minwax stain we had in the garage, and stained up the rest in a variety of colors. Since we could only stain and dry so many boards at one time in the garage, this process took about a week of after-work time. 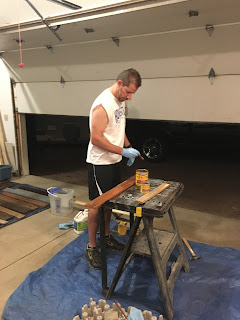 Once that was done, we took down the last bits of trim on the walls, painted the wall black, and then, because we were out of time, waited for over a week with the bed in the middle of the room. This, of course, resulted in me tripping over the nightstand every night while avoiding the ladder in the room and fighting with the curtain sitting on the dresser and blocking the stuff that was supposed to be on the dresser. I have the bruises to prove it.

This weekend, we finally, after two months of prep, finished the project. We started by staging the wood in what would be the order it should go on the wall. We dragged in the air compressor, got the brad nailer, and the glue gun. We dragged the circular and table saws into the driveway, and spent the day fitting, trimming, nailing, gluing and doing fancy cuts (ok, Eric did that. I paint, stain, and organize. I don't cut fancy.)  7 hours later, we were putting the curtains back up, cleaning the floor, and organizing the bedroom. 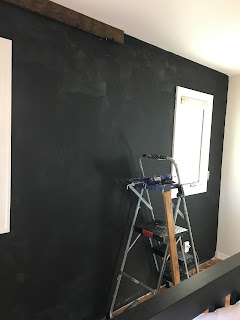 It was tedious work, but no single step was all that hard. This is way more than a single weekend project, but I probably isn't, if you are going to be consistent about it, a 2 month project. But if you're going to do this, plan at least two weeks.

In the end, I really liked how it turned out. Eric did a timelapse video of the final work. Check it out! (It's worth it - the better finished product photo is in there!)

Oh! And to give credit where credit is due, we used ideas and tips from the following DIY bloggers, who I found via Google: 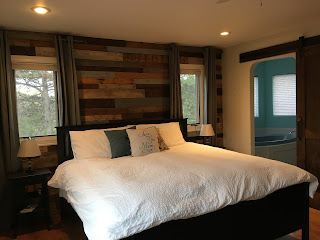