I am left-handed. I am not the only left-handed person out there, but only about 10% of the population is left-handed, and we lefties live in a right-handed world.

I was born left-handed, but as recently as my dad's childhood (my dad is also left-handed) in the United States and today in some countries around the world, institutions would try to insist that lefties use their right hand, that people should deny that their dominant hand was counter to 90% of the rest of society's, and should learn to accept right-handedness.

Not too long ago, church leaders condemned those using their left hand as wicked and evil, citing that the Bible favored the right hand and in fact, those one the left were condemned (see "sheep on the right, goats on the left" in Matthew, for example.) Did you know that there are 25 unfavorable references to the left side in the Bible? Left-handedness was used as evidence against those accused of witchcraft, evil spirits were said to exist over your left shoulder (hence why you throw spilled salt in that direction), and the Greeks even wore their wedding rings on their left hand to ward off evil. It took centuries before people understood that lefties were not out to get them, not out to destroy their way of life, and, in fact were not evil. It's entirely possible that God was not as interested in left-handedness than they assumed. 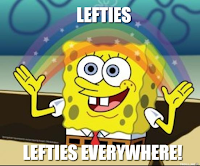 Today, when my colleagues, especially from Africa, come to the office, they often comment on my left-handedness. They stare a little bit, and wonder out loud how the US can have "so many" lefties, mainly because they see more of us here than there. In many places in Africa, left-handedness is still frowned upon, but at least its no longer illegal.

As a leftie, I don't expect special favors. I'm just glad I'm allowed to exist and use the hand I was born to use. I just want to be able to open the same doors as other people, to use scissors effectively, and, ideally, I'd really like it if people understood that sometimes I need to do things a little differently, like turn the ironing board in the opposite direction or angle the notebook I'm writing in to avoid whacking my wrist on the spiral.

I don't know a single leftie that would advocate that our way of life, with our upside down scissors and right-arm-wearing wristwatches, should be how everyone should operate. We're just glad to have the same access to cutting paper and knowing the time as everyone else.

I can't help being left-handed. It would be easier to be right-handed, and trust me, most of us lefties have tried to fit in to a right-handed world. I use "regular" scissors (I know! always with the scissors!), but its awkward and you can feel your brain straining at the adaptation, because it isn't normal for us.

I'm proud to be a leftie. It makes me a little unique, and it's who I am.