Warning: This was an epic weekend where a lot happened and I am all amped about it. This will be a long post.

Have I mentioned that I have trouble doing just one thing at a time? Yea... well, sometimes that leads to a culmination of awesomeness. At least to me - you might not think this is awesome, but, then again, I don't know that there are that many people that share my opinion anyway!

As you know, Eric was on his chase-cation this week. This allowed me time to prep for a couple of days centered around my own interests... I packed:

﻿
Why? I was heading to the Ragnar Trail Relay in Snowmass. This was an 8-person team, single-track trail relay covering a total of about 120 miles over three legs, that each person ran, while the rest of us took turns hanging out at base camp.

After work on Thursday, it was out to the mountains for me. I hit Independence Pass around dusk, and stopped at the top (which is the Continental Divide) to use the restroom up there.

Except it didn't go exactly that way. It was all beautiful and snow covered and the sun was going down, so I stepped away from my car to take a photo.

And turned around to find a fox.

﻿
﻿
Between me and the car. Walking more or less toward me.

Having no desire to get in said fox's way, I back-peddled around and away from the fox, which was not as effective as I thought it would be.  He didn't seem to really understand that I wanted to stay away from him, and also had no plans of really going anywhere. I hop-danced my way around eventually back to my car, at which point the fox thought it would be a grand idea to stay between the car and the restroom. Like, make yourself at home and stay.

Turns out, water really does flow both ways down the Continental Divide. Good thing I was the only person on the pass.

Got to Snowmass just after my roommates in my hotel room did. MaryJane had organized (thank goodness!) room sharing, and fortunately it worked out. I slept for garbage that night, but that was not going to prevent the race from going on. Neither was  the horrible stomach trouble I started experiencing... after we got to our campsite and race location where only port-a-johns were available. Suck it up cupcake, because I was in for a LONG ride with that. It's been a long month, and this is not the first time that I've had "stomach trouble" (ok, seriously, basically whenever I say that in this blog, you know what I actually mean, right?)
﻿

But no complaining! We were in a gorgeous location, and we were going to run on trails! TRAILS! Basically, my favorite thing. We set up our campsite (shout outs to MaryJane and her friend Jamie, who brought awesome, large tents for us, and whomever brought the shade tent for sitting and food), moved the rest of the cars to the parking area (only one was allowed nearby), and watched out mandatory "safety video" (basically, don't fall off the mountains, don't poke bears with sticks, don't drink booze and run.) We started our relay at 1:30pm.

I was runner number six, and had the advantage of having MaryJane run the legs in the same order I did giving me the low-down before my runs. I got out on the "red leg" the longest leg with the greatest elevation (8000 ft to 9000 ft) first. What a gorgeous run! The first mile I sucked the lack of oxygen and thought that this might be a problem, but then my lungs kicked in, and was able to make it up the 2.5ish mile steady climb, before reaching an amazing ridge that was breathtaking, literally and figuratively. Down was flying fast, and felt so good... until it felt so bad because something happened in my back that I was in tears by the end of the 6.78 mile leg. I was seriously worried about continuing and frustrated with a disappointing end to a leg that had literally been so amazing that about 8,900 feet elevation, I was wondering how to turn trail running into a career. However, several Aleve later, I was back on my game, even if there were still some frequent trips to the potties... but that was over by the start of the second leg, thank goodness!
﻿

Grabbed dinner with another teammate Katherine after her first leg, and had some great conversation. Dinner was provided by the race... did I mention that Ragnar does a really good job of race organizing? I've done a LOT of races in my time, and this was one of the better constructed ones! They had lots of food options including enough for those of us who are meat-shy, there were plenty of toilets, and plenty of water at the water stations for filling your own water bottles. There was enough space for camping, and there was good preparation ahead of time so we knew what to expect.

After that, I grabbed some sleep... and headed over for my second leg pretty early, seeing off my teammate Jason. About 2am, I was off to my second leg at just over 4 miles. It was a beautiful leg running wise, although don't ask me what it actually looked like. I purchased a good headlamp but that just kept me from killing myself by falling off the trail. It wasn't as steep, but it was a nice trail... with very few people. At 2am, by myself for a good long time on the trail, I started calling out "hi bear!" every ten steps to make sure that whatever was out there knew I was coming... but MAN what  a leg! I was so jazzed by the end of the leg that I was ready to run again immediately! Fortunately, my teammate Eric was there hanging out around the race campfire, so we made some s'mores (again, provided by Ragnar) and talked with other runners. Eventually went back to the tent and caught some more sleep.

Up and over to the race start again really early, where I hung out around the fire and got rained on. Oh yea, it RAINED. It rained some Friday afternoon, and rained quite a bit Saturday morning. While I waited for Eric to come in from his longest leg, I dodged the rain by picking up some free stuff... new water bottle or Smartwool socks? Don't mind if I do!

My last leg was really wet. Muddy, slick, raining, wet. It was slower than I wanted it to be, but short of sliding off the side of the hill, I did the best I could and fun doing it. Most of the runners around the fire pit had been complaining that this, the shortest leg, was actually the hardest, but between the slower speed due to the mud and the "leg from hell" ideas that had floated around, it wasn't that bad. Plus, more beautiful trail to end my first (but hopefully not last) Ragnar relay. We finished as a team a little over 24 hours after starting, and I am so grateful for folks that are willing to take me up on joining their team! Totally in for next year!

In there too, I got to see my friend Stephanie, who I had grown up with and now lives in Snowmass. Super fun to catch up for a couple minutes.

Back home, with about 15 minutes to throw stinking, wet, muddy running clothes into the laundry before friends from Fort Wayne, Pam and Doug Barcalow, came to spend the night. They were travelling back from Arizona where they moved their son Matt (who at one time was Eric's best bud) and his family from South Carolina. It was super fun to catch up with them - we had the opportunity too to tell them how much we admire them (because we do) and how we want to be them when we grow up! They are seriously some of the most encouraging, positive, adventurous people we know!

Sunday morning, way more early than I would normally do the day after a 24 hour, 15.5 mile race, I had a super-secret visit from a friend (who remains nameless for the moment) from way out of town come for coffee and a chat. There aren't a whole lot of things I would be willing to do at 7am after not sleeping for a couple days and running that much, but THIS was one of them. Great visit. Great friendship. I'm lucky.

The topper though? Yea, after a much needed nap, Eric and I went up to Denver for dinner and a concert... but not just any concert. Eric got us 5th row tickets to one of the greatest bands in recent history.... U2. I'm a little late to the game on U2 fandom, perhaps not really paying attention to their music until college... so this is only the second concert we've been to of theirs. But SO good! Couple of points of weirdness... mainly, Bono dyed his hair blond and it was like looking at a midlife crisis. He also got a little rambling at points, but the music was incredible. The Edge may be the greatest guitarist playing professionally, and yes, I may have been in tears by the end of the second set, when the opening chords of Pride (In the Name of Love) screamed out. Yep, they're getting older. So are we, the fans. But they still put on one amazing concert, and if I get the chance to go again, I'm in. 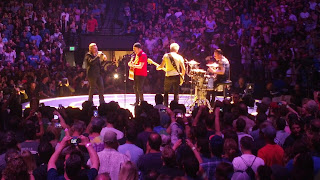 Totally exhausted by the end, I stayed so-so awake on the way home, and may have hallucinated bovines on the side of the road. We crashed hard in bed as soon as we were in.

It was a good weekend. Epic even.

To finish it off, take a listen to my recording of  The Edge and Bono's acoustic piano version of Every Breaking Wave from Sunday night.