Six months ago, Eric decided that we needed a no soliciting sign. Since he works from home, he is the one that mostly has to answer the door when the encyclopedia salesman, window cleaners, Witnesses, Mormons, cables guys, and/or save the planet people knock on it. Plus, he doesn't like to say no, so if it happens to be the kid with the sad story about fundraising by selling newspaper subscriptions, we end up with three copies of the Sunday Times for the next four years.

So we looked for a sign. There plenty out there, but I was really partial to something that went like this, mainly because I am the sarcastic brat of the family:

Eric thought it might be too harsh and that someone could be offended (but wouldn't that make them want to go away, and isn't that the point?) but sure. Ok. So we got a different sign, one with a cookie exception, because, you know, the addiction, and Eric really likes Girl Scout cookies (and we usually buy the ones I don't particularly like, so I can stay mostly on the 12-step program.)

Now granted, the kid (Clayton) is fundraising for what he believes is a good cause - earning his Eagle Scout status. I'm not exactly sure what he needs the money for in order to do what ever he has to do to earn Eagle Scout status, but that's what the letter was about. He even left his cell phone number so I could call or text him to purchase the King Sooper's gift cards he is selling.

I was really temped to text and ask him what level of reading comprehension is required to be an Eagle Scout.

Clayton, here is one thing you need to know if you are going to become an Eagle Scout:

We're serious about the cookies. If you don't have them, get off the porch. Yes, I know, I can buy your gift card and take myself to King Sooper and purchase cookies. However, and I can't stress this enough:


IT IS NOT THE SAME!!!
Seriously, I'm going to switch to this  sign: 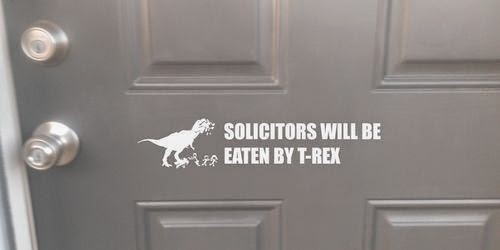