I'm back on the horse.

Or, perhaps, more accurately, the treadmill.

After what seems like FOREVER off, and even LONGER at a reduced rate, I have "official" permission to run again.

One mile at a time.

I am allowed to run one mile, then do another mile the next day, provided that my back, knee, IT band, and post-tibular tendon are not in pain.

I am trying NOT to think that pain is relative. Cognitively, I know that I need to not do what hurts right now, because if it does, something worse will happen. A flare-up will reoccur, and I could be in serious trouble, especially for the August 2 Rocky Mountain Half Marathon and the September 20 Dances with Dirt 100K Relay.

I also know that despite the foot tendon being the most dramatic part of the injuries (see here, here, and here for the ridiculousness that has been the prime-time mini-series), the back is the least healed. A MRI is scheduled for Monday night to take a look-see in there and hopefully find whatever it is that continues to persist, give it a good talking to and a timeout so it can think about what it's done.

However, one mile is hard. Hard to run, and then stop. I'm a distance runner; its what I do and who I am. Stopping after a mile? Psshaw. 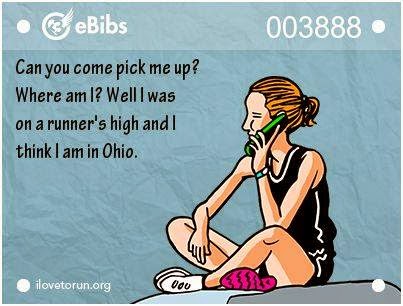 This has happened. Ok, not to Ohio (especially not since we moved to Colorado!), but there has been more than one time when I have called Eric and told him to come pick me up because I just wanted to keep going in a single direction and not turn around. I have also had him drive me out into the country and leave me to run home. Megan can attest. She has been in on this with me. My idea, I promise, no Clark Griswoldian idea of "Take you out in the middle of nowhere, leave you for dead?"

Ok, well, I better take it, because it was only a half a mile last week.

It's even harder to get high on a half-mile.