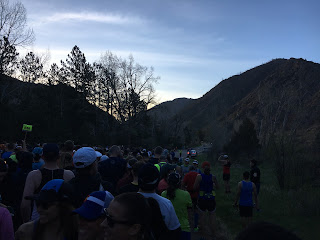 I am writing this from the Denver International Airport, where I am nearly three hours delayed taking off for London, because there's nothing like an end to a race like sitting on an airport floor, stretching intermittently before a nine hour flight...


I ran the Colorado Marathon today in Fort Collins, Colorado. Eric and I drove up Saturday and spent the night, and the poor guy got up with me at 3:40am this morning to get me to the drop point. This marathon is a point-to-point, meaning they drive you out 26.2 miles and then you run back. The start of the race is out Poudre Canyon, following the Poudre River through Arapahoe and Roosevelt National Forests before eventually coming back to Fort Collins. Suffice it to say, it's definitely the prettiest view of any race I've run (let's be honest, all you see is trees during the Pikes Peak Marathon).

The race starts at 6:30am, so as you run down the canyon (the race is almost entirely downhill), the sun starts to rise. Because of the downhill, I started out running what felt easy, but was above the pace I planned for. But, my body felt good and I just went for it. The first 8 miles felt like nothing - floating along, reminding myself to look up from time to time because the scenery is much prettier than the road. I heard frogs croaking, and crickets chirping. From time to time you could smell the river and the pine trees. Nice.

I ran this race as smart as any race I've run. Knowing it was downhill, and knowing the paved road sloped significantly, I kept to the shoulder as much as possible to keep my footing flat and soft. I ran the first half on pace to be in at 4:06 if I ran dead even (not that I've ever run a dead even race.)  I faded a little after the half-way point, but then rallied to the previous pace through about mile 16.

Eric was waiting on the side of the road about mile 16.5. I gave him a big kiss and those endorphins got me through another half mile, wherein I started to feel the pounding in my feet. The balls of my feet hurt and my toes felt stiff from the downhill. I started to feel the miles and just before mile 18, was passed by the 4:15 pacer. I kept going and there was Eric somewhere past the mile marker. Another kiss and a turn and a relatively large hill. Up to the top and back down the other side.

At 20 miles, I was slower, but I knew I had no fear of not finishing... until something started to hurt in my hip. I think because of the road grade, despite my best attempts, my hips weren't even and the left was taking the brunt. By mile 23 I was in some significant pain, and had to stop to try to stretch is out several times... to no avail. Coming through the last mile, I think I had a pretty grim look on my face, but tried to smile and wave to the folks in town who were cheering. Finally, I passed the 26 mile mark, and at the last turn, there was Eric! I passed him, and there was the straight-away to the finish.

A funny thing happens when you site a finish line. You gather energy from the remaining places it resides, and, even though your hip hurts and you've already ran 26 miles and you are pretty sure there are blisters on your feet and you feel every square millimeter of skin that got missed by Body Glide (I have some great road rash on the periphery now), you kick. And I did. It started slowly, but by the time I hit the last 100 meters or so, I was pumping my arms and driving it home.

The best part? I crossed the line to my name being called, to which the announcer said, "Great pace. Great finish. That's some female empowerment there."

Yes. Fist pump to the air, and off to find Eric, where there may or may not have been some tears because that's what happens to me at the end of races.

Eric was wonderful and insisted that I get a little massage in the recovery area, and I also borrowed a Pilates studio's foam roller. Then on to CooperSmith's, who were amazing sponsors offering free craft beer and good pizza for FREE to all marathon finishers AND their families! So awesome. Then back to the hotel, where I spent some time in an ice bath before cleaning up... and it was on to the airport.

I'll also take this flight to London, if it ever gets off the ground.