Where Everybody Knows Your Name

Since March 11, I've been trekking up the Incline twice a week. I go before work or after work, or get up early on the weekend and make the slog - whatever works best for the schedule that week. I'm not fast - as evidenced by the guy who recently wrote an article in the paper claiming to have completed the Incline in the snow while HIGH in about the time it takes me to drag myself up those steps. Humbling, that is. Also slightly annoying, but I digress.

In the past week or two, it appears that I have become a "regular" on the Incline. The first time I noticed, it was when a man passed me early one Friday morning and said: "getting one in before the storm," which was absolutely true. Something about his tone said he knew I was there a lot... which was good, because I am not so good with the talking when I am climbing. I am also not so good with recognizing people I know. Our friend Andrew has recognized and talked to me twice this season on the Incline, and unfortunately, he could have walked right by me and I wouldn't have noticed if he hadn't said anything. And then I couldn't really talk and at least once may have called him the wrong name, but I can't be sure because I also can't really think or comprehend things at points on the climb.

Since the storm, I have also noticed that people I know to be regulars (there are folks that do this every day, and you know who they are, especially at the lower elevations before your brain stops working) and a few more I suspect are regulars but I don't see all the time because my "regular" isn't the same day and time each week... these folks are now acknowledging me, and not blowing me by like a one-climb tourist.

Granted, the fact that I'm in sensible clothes, trail running shoes, carry water and winter traction on my belt, and am a 38-year old woman going it alone probably plays a part in all of this, but I don't remember this happening in years past. Also, I don't talk in hash tags. Ok, I don't talk at all but at least I'm not that lady that was standing in the parking lot wearing quite a bit of makeup at O-dark-30 when I came by and she looked at me and said "no excuses, amiright?" I could practically SEE the pound symbols falling out of her mouth. I'm sure she Instagrammed her summit, but hopefully she used a filter because that amount of makeup SURELY would have smeared and/or run on her way up.

It's kind of fun. Sort of like a secret club where you don't know the other members but you sense they are around. Of course, I think that, and start feeling like maybe I know how to do this thing, and then TOTALLY bite it going down Barr Trail yesterday. At least I didn't tear my pants and there weren't as many scratches as last time.

It's also been a beautiful journey so far. I don't take a lot of photos - I'm a "get up and get it done" climber, but there have been a couple of occasions when it was just too good not to record the moment, including the one several weeks ago when I got to the top and I was the ONLY one there, and the one last week where we had a cloud inversion.  Take a look: 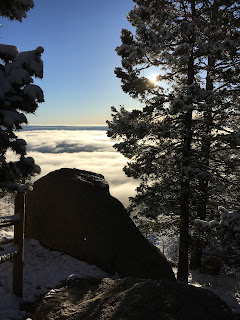 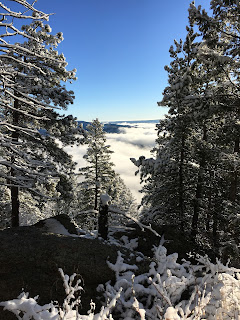 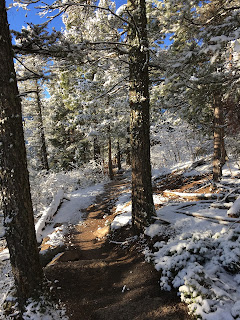