Weekends with the Boys

"Our boys" come to spend weekends at our house on a fairly regular basis.

I believe I have alluded to this in previous posts, but I don't know that I've ever explained. During the summer of 2015, we started volunteering with the Air Force Academy as "cadet sponsors" (ok, so we are most commonly called "sponsor parents" but that whole "parents" thing sticks in my throat and I can't quite get it out... so let's stick with "sponsors.") We had been aware of this program, but hadn't engaged in it until we received a call from Coach Z, with whom Eric coached football back when we lived in Indiana (among other associations). His quarterback was graduating and had been accepted to the Academy, and would we be interested in being his sponsor? The Academy matches cadets with community members since most of them are from out-of-state and have limited support systems here in Colorado. Oh, and the Academy is really hard - educationally, physically, and mentally.

Anyway, we said yes. Unfortunately, we said yes while living in the house in the woods during a summer that Eric travelled a lot, so our first opportunity to pick up said cadet was one in which Eric was out of town. And we also agreed to pick up some girls for the weekend, one of which we knew from our old church back in Indiana, and the other was her friend. So, poor, exhausted cadet got his first meeting of his sponsors being one sponsor low. Also, I picked him up late because the girls were stuck on the Incline, and I ended up leaving them there... and I picked up Logan stinking like I climbed the Incline, then dragged him around the city going back down to get the girls, up to the house on the other end of the county, then returning the girls to their camp even farther away before dropping him off back up at the Academy. Had I been Logan, I would have asked for someone else.

Fortunately, he didn't. And, after a couple of meet-ups, things worked themselves out so that Eric was along and I was slightly less smelly, although I still stink on a fairly regular basis.

Not too long after the "regular" school year started, Logan asked if we would consider also hosting his roommate, Joseph, who didn't have sponsors. Why not, we said?

So we got Joseph.

And its been good. They are really nice boys, and we enjoy spending time with them. We didn't get to see them too much that first semester, because they were pretty constantly busy with lots of mandated things they had to do. But we got to see them more after that first semester... well, when they are awake. Like most college students, they sleep. A lot.

They are also really funny, and they have a really strong connection to each other, which is a lot of fun. And they are helpful, which let me tell you, came in handy when we moved one million times. They even took the lead in moving a refrigerator that we borrowed from the caretakers because one house didn't have one... a refrigerator we promptly turned around and moved back out, not because the boys did a bad job but because that caretaking contract was cut out from under us and we moved out of that house 24 hours later.

Since we moved into our permanent home, it's certainly been easier to have them over. They have their own rooms, and don't have to worry about making sure their rooms are in perfect shape before we go anywhere. And, as second year students, they have more flexibility to spend the weekends with us, and they've become "our boys." 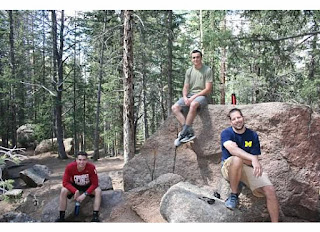 We took them hiking this fall, and, when they weren't sleeping in the car (seriously, so much sleep! The Academy works them hard!), I think they got to see a little more of the state.

Super Bowl weekend, they asked to bring over another cadet. Another nice boy, and although we haven't seen him since, I wouldn't be terribly surprised if we ended up with another cadet... but I'm not sure he would want to consistently sleep on an air mattress.

Two weekends ago, they had their girlfriends fly in for the weekend...

And because I am totally not ready to be a cadet sponsor grandparent, and because we've met both sets of the boys' parents, they darn sure slept in separate rooms, which I don't think they had an issue with. Also, our house, our rules.

Looking forward to whatever's next with these guys.