Our own thing generally involves remote corners of the world.

We considered camping, but two things happened. 1) It blizzarded, and there wasn't really a good path for getting the pop-up out of the garage where we are storing it (read: really big drift in the way.) 2) where we were thinking about going had a change in the weather and got really cold. So, we packed up our camp stove, grill, picnic basket, food, hiking gear and boots, and headed to Petrified Forest National Park in Arizona, sleeping in a motel instead of the pop-up.

The Petrified Forest is awesome. 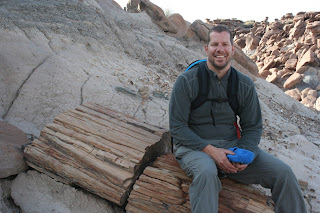 We got to the actual forest on Thanksgiving Day, having taken off for parts unknown on Wednesday and spending the night in Albuquerque. We checked in at the Visitor's Center and found, to our delight, that there was one wilderness pass left for the week for what's called the Devil's Playground, a remote area of the Painted Desert that features badlands-like rock features and more than a few specimens of petrified wood. We were one of only 3 groups allowed there that week, and we had the place entirely to ourselves. We spent the afternoon hiking through the desert, discovering pieces of petrified wood and basically being totally fascinated. We took about a million photos and stopped every time we found another piece of petrified wood, which was littered everywhere around the desert. It was like we were the only people on earth that afternoon, and we were discovering fossils no one had ever seen before. We know it wasn't true, but I felt that way, and it was an amazing feeling.

﻿﻿﻿﻿Turns out that the park closes at 5pm. Petrified Forest National Park is the only park I know of that actually closes, and I didn't realize this when we were making our plans to spend Thanksgiving in the park. I fully intended on cooking at a picnic area in the park, but because of the early closure, we had to figure out other plans. We didn't really want to cook dinner in the parking lot of our motel, but fortunately, we were able to find a city park with picnic tables and a grill area right near a parking area. So, we hauled out the cooler, grill, and stove, and cooked up our Thanksgiving feast as the wind blew at 20mph and the temperature steadily dropped. Dinner included:


﻿﻿
The Brussels Sprouts are currently my favorite thing, and I want to eat them all the time. Approximate recipe at the end.

By the time we were done cooking, the wind was kicking pretty good, and it was uncomfortable to fathom eating at the picnic table... so HailNo to the rescue! Dinner was good, albeit not necessarily traditional (in any sense of the word!)

﻿﻿﻿﻿﻿﻿The next day, we were back in the park, seeing all the more travelled sites of the park, going pretty methodically from top to bottom. We did do one other long hike that was also considered backcountry... even more so after I insisted that the "trail" was the trail, and then it wasn't and led us around the valley under the butte we had come down and we had to Baja it back... all the while the wind had kicked up to 30 mph and was in our face basically the whole time. Eric was a little less than thrilled, but was a good sport, AND we got all kinds of cool photos of large petrified stumps, which I will try my best not to overburden everyone with... ok, maybe a couple at the bottom of this post.
﻿﻿﻿﻿﻿﻿﻿﻿﻿﻿The next day was Saturday, and Michigan was playing Ohio State (we're not going to talk about that game), so we headed further west to Flagstaff to watch the game and explore the town. Before we got out of the area however, we stopped at a ranch that advertised petrified wood for sale... by the bucket. After hanging around on someone else's land and wondering if the "open" sign was actually correct, we finally found someone to give us instructions and a bucket, and we were off to hunt (legal) wood. Eric and I had a disagreement over what "in the bucket" meant... what do you think?
﻿

﻿﻿﻿﻿﻿﻿﻿﻿﻿﻿On the way back, we also explored areas covered by the old Route 66. Route 66 used to run right through Petrified Forest on its route from Santa Monica to Chicago. We had seen that portion during our sojurn in the park, so we followed the parts we could (some of the road no longer exists, and/or has been renamed and incorporated into the Interstate Highway System). This included a stop in Winslow, Arizona, a town famous possibly only because of the Eagles song that mentions it (I'm standing on a corner in Winslow, Arizona....) So we stood on that corner in Winslow, Arizona, had coffee in the corner diner, and realized we had done pretty much everything there is to do in Winslow, Arizona. So, we moved on, but began talking about a Route 66 road trip. Probably not in the next year, but its on the list, and I have an urge to photograph all kinds of kitschy Americana that undoubtedly exists in better or worse shape along the road. Hang on to your hats, kids, because there's a plan in the works!

﻿﻿﻿
We made our way back and managed to bypass a doozy of a storm in Colorado, arriving back to our home state after the roads were cleared but the mess was evident. I'll take it! This may not be the start of an annual tradition, but I definitely could get used to an alternative Thanksgiving! Have HailNo, will travel!

1lb Brussels Sprouts, washed and half or quartered length-wise, depending on how large they are (I have used both fresh and frozen in this recipe. Both work, but fresh travel better and cut easier.)
1/4 cup (or a decent sprinkle) minced hazelnuts (chopped walnuts work too, but try the hazelnuts! They're good!)
2 tbs maple syrup (or one good sized squirt if you're travelling without measuring instruments)
2-3 tbs balsamic vinegar
2ish tbs olive oil (preferred, or heavy non-stick spray if you're travelling with minimal condiments)
salt and pepper to taste
﻿﻿1/2 cup dried cranberries

Spray your pan thickly with non-stick spray, or drop the olive oil in the pan. Add Brussels Sprouts and sauté about 8 minutes (on a Coleman 2-burner stove outside, so maybe a little less time at home) until the Brussels Sprouts are getting tender. Toss in the rest of the ingredients, stir to spread vinegar and syrup in an even coat. Cook an additional 2-4 minutes to let the sprouts finish cooking and soak in the syrup and vinegar.

Eat. This recipe easily doubles or triples (trust me.)

Ok, I just realized that I spent most of this time trying to write Brussels as "Bruxelles." 15 years out of Europe, and some things just don't die...